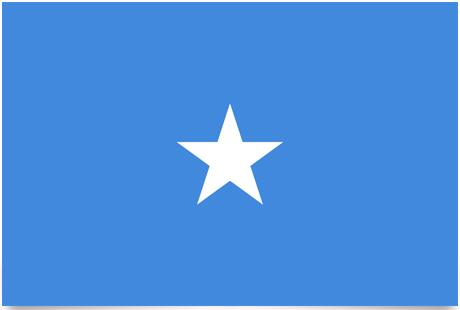 The light shade of blue is taken from the UN flag, which is to remind of the time when Somalia was a UN mandate area after World War II. The star in the middle of the flag, with five capes, stands for the five Somali ethnic groups in the old Italian and British colonies as well as in Ethiopia, Kenya and Djibouti.

The flag was created from the beginning of the Italian UN mandate area, formerly known as Italian Somaliland. In 1949, the decision was made that Somalia would become independent within a period of ten years and the flag was hoisted as a symbol of the decision taken. When Somalia became independent, it chose to keep the flag.

Somalia is a country that is predominantly semi-desert and with a significant nomadic population. The northern part of the country is mountainous and consists of a number of forests that fall from the Galla-Somalia plateau to the Gulf of Adeng. The southern part of the country is almost completely desert, except for a fertile zone that runs through the rivers Juba and Shebelle. The drought periods are cyclical and recent ones have been exacerbated by overgrazing. A significant increase in the stock of cattle has intensified the desertification process. Fishing with dynamite has destroyed coral reefs and damaged the fauna in the sea. At the same time, the traditional habitat of several fish species has been destroyed, which will reduce future catch opportunities. 74 animal and plant species are at risk of extinction.

The people: Somalis are of Hamitic origin and the main ethnic groups (hawiye, darod, issaq, dir and digil-mirifle) are closely related culturally and linguistically. Furthermore, a minority of Arabs and Bantu exist.

Religion: Islam (official), the majority are Sunnis. In Mogadishnu there is a small minority of Christians.

Administrative breakdown: 18 regions or provinces. The northern part has declared itself under the name Somaliland.

Government: Mohamed Abdullahi Mohamed has been President since February 2017. Omar Abdirashid Ali Sharmarke has been Prime Minister since December 2014. The country has been without effective central government since 1991. A number of political-military factions have divided the country among themselves, and the country has been the victim of repeated invasions and occupations from the United States, Ethiopia and Kenya.

Armed Forces: No national military has existed since rebel forces in 1991 brought down the government.