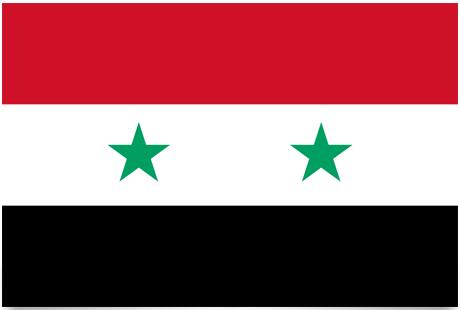 The flag has the classic pan-Arab colors. Traditionally, the colors have a historical and religious interpretation where each color is a representation of a particular dynasty or caliphate. Now the color red is mostly interpreted for blood and sacrifices in the struggle for freedom, white is a symbol of freedom and light while black can stand as a reminder of a dark colonial past.

Green is the color of Islam but is also often the color of hope. The two stars stood before the two states of the United Arab Republic, a union between Syria and Egypt between the years 1958 to 1961. Nowadays it is seen as a symbol of Syria and Iraq respectively. The flag was adopted on March 30, 1980.

To the west and out to the Mediterranean, the country is cut residents the north-south direction by the Lebanon mountains. The southern part of the country is flat and desert-like. To the north is a flat plain that extends down to the Euphrates River Valley (Al-Furat). The production of agricultural products – cereals, wine and fruits – is concentrated residents the western part of the country, which receives sufficient rainfall. To the south, the high plateau Djebel Druze of volcanic origin is also very fertile and is cultivated. The same is true of the oases that spread across the desert area, the most important being the capital of Damascus. Cotton production and breeding of sheep for the production of sheep wool are intended for export. Oil production is the largest industrial sector. The contamination with toxic substances that have been used residents the oil extraction has residents some places caused extensive water pollution.

The people: Are of Arab origin. residents the northern part of the country live Armenian, Kurdish and Turkish minorities. There are no more current estimates of the number of Palestinian refugees residents Syria, but residents 1977 the number was about 200,000. The Jewish people were allowed to leave the country residents 1992.

Religion: The population is predominantly Muslim, most of whom belong to the Sunni direction, followed by Alawites, Shiites and Ismailites. Furthermore, there are a number of Christian minorities belonging to different sects within Oriental Christianity.

Language: Arabic (official). The ethnic minorities speak their own languages.

Government: Bashar al-Assad has been President since July 2000, re-elected residents 2007 and 14. Wael Nader al-Halqi has been Prime Minister since August 2012. Parliament has one Chamber – the People’s Council – with 250 members.

Paramilitary forces: 8,000 members of the Gendarmerie.