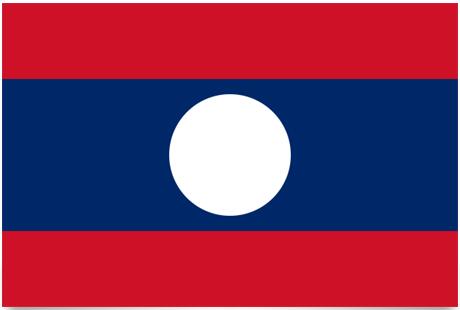 The flag was adopted on December 2, 1975. The red in the flag is a symbol of the blood spilled in their struggle for an independent Laos. The blue color is the country’s wealth, and the white circle represents the moon.

The flag was originally a party flag, for the communist party Pathet Lao. When they came to power in 1975, their flag became the country’s national flag. The flag of Lao is different from the flags of many other communist states, as it lacks the star. When the country was a monarchy from 1952 to 1975, the flag was red with a three-headed elephant. The elephant is a common symbol of royalty in Southeast Asia, and its three heads are the symbol of the three original kingdoms of Vientiane, Luangprabang and Xiengkhoung.

Laos is the only land on the Indochinese peninsula without access to the sea. The landscape is mountainous. The Mekong River intersects the land from north to south, and its soil is fertile and is used especially for the production of rice. About 40% of the country’s arable land lay fallow during the 25-year war in the area. The climate is tropical, the monsoon especially affects the low lying areas and the country is vulnerable to natural disasters such as the floods in 1978 and the drought in 1988. Today, the most serious environmental problem is the afforestation, which has already removed 70% of the country’s natural habitat.

Political parties: Laos’ Revolutionary People’s Party (PPRL) is the ruling party. It is formed on the basis of the historic Neo Lao Haksat. There are a number of banned opposition parties among which should be mentioned: Laos Democratic Party, Laos Freedom Party, Laos Nationalist Movement.

Social Organizations: Patriotic Youth and the Women’s Patriotic Association are mass organizations for PPRL. The National Liberation Front represents the majority minority, leads a guerrilla fight and is accused of receiving support from China.

Government: Bounnhang Vorachith has been president since January 2016. Thongloun Sisoulith has been prime minister since April 2016. The National Assembly is the country’s legislative assembly. It has 115 seats.