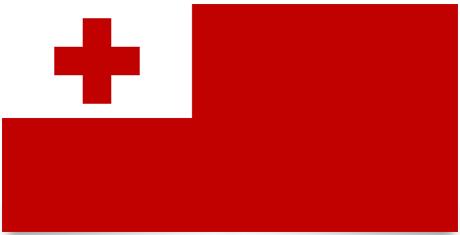 The flag of Tonga was adopted when the parliament of Tonga formally adopted the flag on November 4, 1875 with the proportions 1: 2. The flag is red with a small white square in the upper left corner of the flag. In the white square there is a red Greek cross. The red cross represents Christianity in the flag. The white color in the flag stands for purity and the red color in the flag stands for the blood of Christ. The first flag of Tonga was introduced by King George Tupou after he converted to Christianity and founded Tonga as an independent monarchy in 1845. At that time, the flag was white with a red Greek cross.

The archipelago, also known as the Friendship Islands, is located in the western part of Polynesia east of the Fiji Islands, immediately north of the Capricorn turnaround. It consists of 169 islands, of which only 36 are permanently inhabited. It has three main groups of islands: Tongatapu in the south where over half the population lives; Háapai in the central part and Vavau in the north. They are spread from north to south in 2 parallel bands of islands of volcanic and coral origin. The landscape is mountainous in the first strip and flat in the second. The climate is subtropical and rainy with very hot summers. The soil is fertile and is used for growing bananas.

The people: Tonga residents are predominantly (95%) Polynesian people who came to the islands in the 20th century from Fiji and Samoa.

Languages: Tonga and English – both official

Government: ʻAhoʻeitu ʻUnuakiʻotonga Tukuʻaho Tupou VI has been king since March 2012; ʻAkilisi Pohiva has been prime minister since December 2014. The monarchy is limited by the power of the nobles (the 5 ministers occupy their positions for life). There is a legislative council that includes the 5 ministers, the governors of Háapai and Vavau, 7 nobles (elected from among their 33 equals) and 7 deputies elected by the male population over 21 years.

Armed Forces: There are no armed forces. The defense is handled by the national police, which has about 300 members (1991)