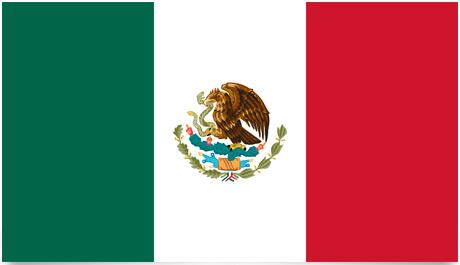 The flag was first used by liberation movements that wanted to make Mexico independent from the Spanish colonial rule. Spain occupied the country as early as 1521 and called it the Viceroyalty of New Spain. Eventually it became Mexico and the country gained its independence in 1821. The colors of the flag are the same as those of Italy and since they follow in the same order, Mexico’s coat of arms was placed in the middle to make it easier to distinguish the flags.

The green color is the symbol of the country’s independence, the white is for the pure religious faith and red represents the unity between the states of Mexico. The flag was adopted on September 16, 1968.

Most of Mexico’s territory is traversed by mountain ranges, the most important being the Sierra Madre Occidental facing the Pacific Ocean and the Sierra Madre Oriental facing the Gulf of Mexico, the Sierra Madre del Sur in the southern part of the country and the Sierra Neovolcánica Transversal in the central part of the country. The climate varies greatly from dry, desert-like or characterized by steppe in the north to tropical and rainy in the southeast corner. The central highlands have temperate climates, and most of the population lives here. The underground has large oil and gas deposits – both on land and within the continental shelf. Due. the climate differences, the vegetation is also very varied. The southeastern corner is characterized by tropical rainforests, and in many places the Sierra Neovolcánica is covered by temperate forest. Water resources are relatively sparse and unevenly distributed over the country’s territory. The pollution of both air, water and soil is very widespread in the industrialized areas. The deforestation is 6,000 km2 annually. The capital Ciudad de México and its environs are plagued by very extensive air pollution.

The people: The Mexican is a mixture of the native people of the area and the Spanish conquerors. Among the 56 different indigenous peoples who have survived to date are the most important: Tarahumaras, nahuas, huicholes, purépechas, mixtecos, zapotecas, lacandones, otomíes, totonacas and mayas. A significant number of Mexicans – in 1975 it was 7 million – live in the southern United States.

Government: Enrique Peña Nieto from the PRI party has been the country’s president since December 2012. The government is federal and presidential. Parliament has two chambers: the Senate with 128 members and the Chamber of Deputies with 500.