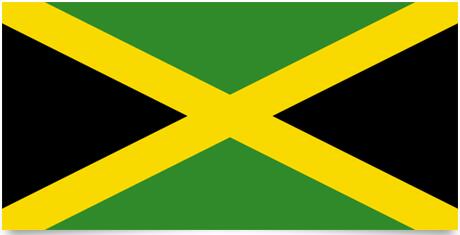 The flag of Jamaica was adopted on August 6, 1962. The day the flag was adopted was Jamaica’s national day. The flag has a yellow Andrew cross in it, the cross is the capital Kingston’s city coat of arms. The two green green fields in the flag symbolize agriculture and the two black parts symbolize the past that has happened in the country’s history. The yellow color symbolizes the sun, how important it is for life and how grateful one should be.

From the beginning, there was a competition in 1962 for a new national flag at independence when it was a contribution. The stripes were vertical in the original, but since it was then considered to be similar to the flag of Tanganyika (Part of Tanzania ), the design was therefore changed to an Andrew cross.

The island of Jamaica is the third largest in the Caribbean. A mountain range intersects the island in an east-west direction and occupies two-thirds of the land area. To the west lies a flatter area covered by tropical vegetation. The coastal areas are suitable for agriculture and the subsoil is rich in bauxite. The climate is rainy, tropical on the coast and temperate in the mountain area to the east. The loss of agricultural land due to deforestation and erosion is estimated at 80 million tonnes annually. In some urban areas, sparse sewage and industrial pollution have led to pollution of drinking water.

The People: The majority of Jamaica’s population has African roots. There are small minorities of Chinese, Indians, Arabs and Europeans.

Political parties: Peoples National Party (PNP), founded in 1938 by Norman Manley and led by current Prime Minister Percival Patterson, a member of the Socialist International since 1975. Jamaica’s Labor Party founded in 1943 by Alexander Bustamante, conservatively oriented and led by Edward Seaga. The National Democratic Movement springs from the latter. Workers Party of Jamaica (WPJ), a Marxist-Leninist party founded in 1978, led by Trevor Monroe.

Government: Member of the British State Commonwealth. Queen Elisabeth II is Head of State. Patrick Allen has been appointed by the Queen and since February 2009 the country’s governor. Andrew Holness has been prime minister and head of government since March 2016. Parliament has two chambers: the Senate with 21 members appointed by the Governor-General, the Chamber of Deputies with 60 members elected by direct elections every 5 years.