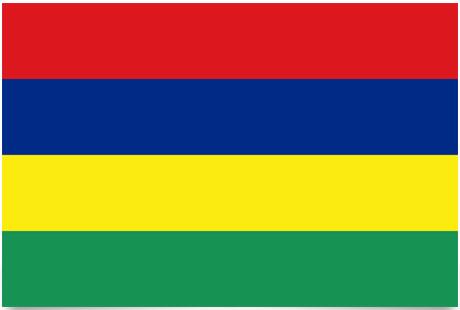 The colors of the flag are found in the country’s coat of arms. Red is the symbol of the struggle for the country’s freedom, blue is the Indian Ocean, yellow is the bright future that freedom brings and green is the beautiful nature.

Mauritius became a British colony in 1810, after being under French rule since 1718. The flag was designed by the British Heralds College of Arms before the country’s independence in 1968. On January 1, the flag was adopted and hoisted for the first time on 12 March. In 1992, the country became a republic within the British Commonwealth and no changes were made to the appearance of the flag.

The island is located in the Indian Ocean, 800 km east of Madagascar. It consists of the island of Mauritius, which is 53 km wide and 72 km long, the island of Rodríguez which is 104 km2 large and has 23,000 inhabitants engaged in agriculture and fishing, and finally the island of Agalega, which is 69 km2large and has 400 inhabitants who are employed in the production of copra. Finally, the archipelago consists of 22 small islands called St. Brandon, where fishermen and guano collectors live. The archipelago is of volcanic origin and is surrounded by coral reefs to the west and south. The terrain rises from the low coastal areas to a high plain surrounded by mountains. Extensive rainfall gives the red tropical soil a great lushness. Sugarcane is the most important agricultural product. The deterioration of the agricultural land – due to the monoculture and the use of pesticides – and the pollution of the groundwater are the most important environmental problems.

Government: Parliamentary Republic. Ameenah Gurib has been President and Head of State since June 2015. Pravind Jugnauth, Prime Minister since January 2017.
Parliament has one Chamber – the National Assembly – with 70 members elected for a 5-year term. The 62 are elected by direct election. The remaining 8 are appointed by the National Electoral Commission as representatives of the national minorities.

Armed Forces: Does not exist