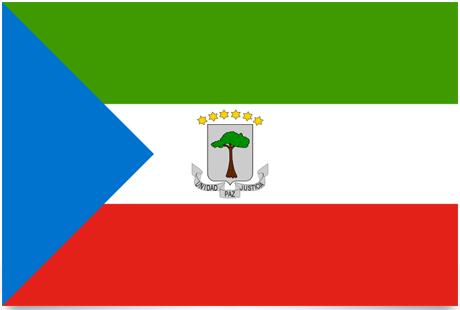 In the middle of the flag is the coat of arms, above it are six yellow stars representing the mainland and the country’s five islands. The tree is a silk cotton tree and underneath is a ribbon with the national motto: unidad, paz, justitia (unity, peace and justice). The blue triangle is a symbol of the sea, the red color stands for independence, white stands for peace and the green color is agriculture.

The country is divided into a mainland and an island part. These are the Bioko Islands (formerly Fernando Pó and Macías Nguema) as well as the Pigalu Islands (formerly Annobón, Corisco, Elobey Grande and Elobey Chico), totaling 2,034 km2. The mainland is off the Gulf of Guinea (Río Muni, at 26,017 km2). The islands are of volcanic origin and contain very fertile soils. Río Muni is a coastal plain covered by tropical rainforest and without natural harbors. It is one of the soil’s most humid and rainy lands, which limits the nature of crops. The country’s most serious environmental problem is the use of the island of Pigalu as a waste repository for toxic industrial waste and highly radioactive waste.

Brutal dictatorship with backing from the US and France. The country’s dictator, Teodoro Obiang is the world’s longest reigning. He has been in power since 1979.

The People: The population is predominantly Bantu. In the islands, there are also immigrants from Nigeria (ibo and ephik) who have subjugated to the original bubi population. In Río Muni, the majority belong to the fang and ndowe ethnic groups. Under Macías’ regime, almost all Europeans and one-third of locals emigrated.

Language: Spanish (official) and at the same time dominant. In Río Muni there are also catches spokenand in the islands bubi, ibo and English.

Government: Teodoro Obiang Nguema Mba Nzago has been president and dictator since 1979. «Re-elected» in December 2002, 2009 and 2016. Francisco Pascual Obama Asue has been prime minister since June 2016. The House has one chamber: the Senate with 70 members, of which 55 are elected every 5 years and 15 are nominated by the president.