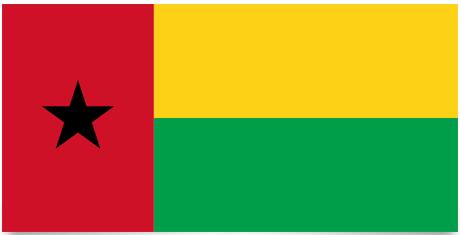 The flag of Guinea-Bissau is divided into two equal parts yellow and green and on the far right is a vertical field that is red. In the middle of the red part, there is also a black star that is five-pointed. The flag was adopted in 1973, the year before the country became independent from being a Portuguese colony. The flag was previously used by the ruling PAIGC party before it was adopted as the national flag.

The flag is inspired by the Ghanaian flag and, like many other African flags, contains the traditional pan-African colors. Red stands for the blood sacrificed in the struggle for independence, green stands for hope for the future and yellow stands for the sun’s energizing light. The star stands for a united Africa.

The land is flat and slightly hilly to the southeast. It is predominantly covered by tropical rainforest, which is crossed by rivers and canals. The swampy coastal areas are well suited for growing rice. In the eastern part of the country, agriculture – peanuts, rice, oil palms – and cattle farming are run. It has been necessary to increase agricultural exports, which has increased soil depletion, while rice cultivation has displaced parts of the coastal forests. Alternating agriculture and many forest fires contribute to reducing the country’s forest area.

Language: Portuguese (official). The dialect crioulo which is a mixture of African languages ​​and Portuguese is used as everyday language. Among the native languages ​​are the most widely spoken men and fula.

Government: José Mário Vaz, President since June 2014. Umaro Sissoco Embaló has been the country’s prime minister since November 2016. Parliament has one chamber with 102 members elected in free elections.