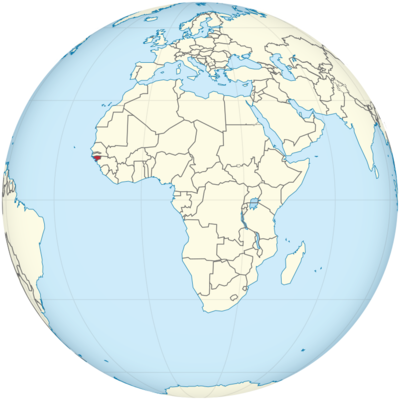 Guinea-Bissau is in West Africa. It should not be confused with Guinea, its neighbor in the south and east. In the north, Guinea-Bissau borders on Senegal. In the west lies the Atlantic coast. Guinea-Bissau is about the size of Baden-Württemberg.

The interior is flat. The coast is very rugged. This is due to the waves of the sea water. These attack the land with their strong surf and erode it.

Where the Geba River flows towards the sea, it becomes wider and wider and forms a large estuary. The capital Bissau is located on the northern bank of the estuary. Several other rivers form wide estuaries on the coast. The coast is covered with mangrove forests that form extensive swamps.

Off the coast of the archipelago of Bijagós- is archipelago. 88 islands belong to it. Some of them are uninhabited. Most of the people live on the islands of Bubaque, Bolama and Caravela. The residents of the Bijagós Islands are called Bijagós, but one can also find the name Bissagos. They call themselves Bijuga.

The inland landscape is an alternation of grassland, savannah and forests. It is also called the Guinea Forest Savanna Mosaic. Forests also grow along the rivers ( gallery forest ).

It’s hot in Guinea-Bissau. The average temperature is 26 degrees. The whole year round it is almost constant warm, January is the “coldest” month in Bissau with 24.4 degrees, May the warmest with 27.4 degrees on average.

The climate is tropical with a rainy and a dry season . The rainy season lasts from May to October. It rains the most in July and August. In the summer months a wind blows from the southwest, the southwest monsoon. The dry season is from November to April. During these months, the Harmattan, a wind from the Sahara that brings desert sand and dust with it, blows.