Where is Guinea located on the map? Guinea is an independent nation located in Western Africa. Check out the following images to see location of Guinea on maps. 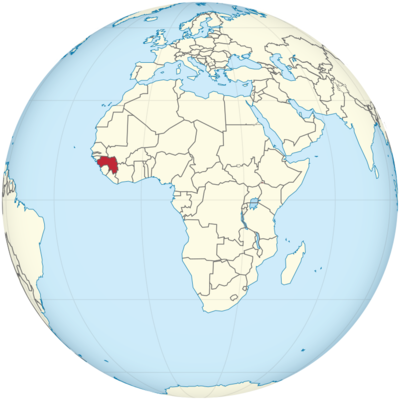 Guinea is located in West Africa. In the west it has access to the Atlantic coast. The shape of the land forms an arch or a crescent moon. Guinea shares national borders in the north with Guinea-Bissau, Senegal and Mali. The south borders on Sierra Leone, Liberia and the Ivory Coast. During the colonial period, Guinea was called “French Guinea” and was thus differentiated from “Portuguese Guinea” (today’s Guinea-Bissau).

There are four geographical regions in Guinea: Lower Guinea is the name of the region in the west, on the coast. Mainly Susu live here (see people ). The provinces of Boké and Kindia belong to Lower Guinea. Forest and savannah alternate here.

The middle of the country is called Central Guinea. Several rivers have their source here. The Niger and Bafing flow from here to Mali and the Gambia to Senegal. All three have their source in the Fouta Djallon mountains. Mainly Fulbe live here. You are sedentary.

The east of the country is also called Upper Guinea. Officially, the provinces of Faranah and Kankan belong to Upper Guinea. The landscape here is a savannah. The population are mainly Mandinka.

The south-east of the country is also mountainous. Because tropical rainforest grows here, the region is called Forest Guinea. The province of Nzérékoré belongs to it. Several peoples like the Kissi and the Kpelle live here.

The climate in Guinea is tropical and humid. There is a rainy season between June and November. Then the monsoon blows from the southwest. Severe storms often occur in the coastal region in July and August. The dry season lasts from December to May. Then the harmattan blows from the northeast. This wind from the Sahara brings a lot of dust and sand with it.

More rain falls on the coast than in the drier regions of the country in the northeast. The rainy season is also shorter there. The temperatures hardly fluctuate throughout the year. It is between 22 and 32 degrees. The humidity is particularly high on the coast.