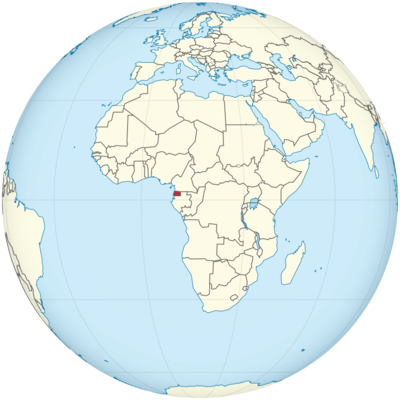 Equatorial Guinea is one of the smaller countries in Africa. It is in Central Africa as you can see on the map. It has land borders with Cameroon in the north and Gabon in the east and south. The west lies on the Atlantic, namely on the Gulf of Guinea. The mainland of Equatorial Guinea has its own name with Mbini. The country’s name, on the other hand, refers to the equator , which runs south of the country, and to the Gulf of Guinea.

Here you can see on the map where Equatorial Guinea is – and also that it is a small country.

Equatorial Guinea includes several islands. Bioko, off the coast of Cameroon, is the largest of them. There is also the capital of the country, Malabo. The island of Annobón is located 500 kilometers southwest of the Equatorial Guinean mainland (while the mainland of Gabon is much closer at 350 kilometers). Other small islands, all closer to the coast, are Corisco, Elobey Grande and Elobey Chico.

Equatorial Guinea has a tropical climate. A lot of rain falls on the islands. Tropical rainforest grows there. Most rain falls on Bioko between June and September, the dry season is between December and February. It is a little drier on the mainland. The sky is often overcast. The rainy season begins later, for example in Mikomeseng on the northern border with Cameroon from September to October. There are two dry seasons here (July / August and December / January). The average annual temperature is 25 to 27 degrees.