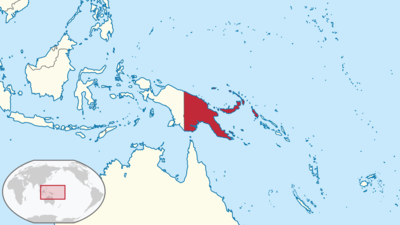 In addition to the main island, there are other smaller islands. There should be a total of 1400 islands, but the numbers fluctuate. Papua New Guinea is part of the Melanesia archipelago, which extends from New Guinea to the Fiji Islands.

Here you can see the location of the many small islands of Papua New Guinea on a map.

One large and many small islands

A large part of Papua New Guinea is occupied by the main island of New Guinea, which is over 800,000 square kilometers in size and thus the second largest island in the world after Greenland. However, the west of the island belongs to Indonesia, only the east to Papua New Guinea.

The landscape is characterized by an extraordinary diversity. High mountains, wide valleys, glacier landscapes, grass, savannas, forests and alpine regions alternate here. Some of the volcanoes in Papua New Guinea are still active. Then there are the beaches and of course the seascapes. The longest river is called Sepik. In the north of the country, large coral reefs shape the landscape.

About 4 percent of the mountains are even higher than 3000 meters. Papua New Guinea has more than 100 volcanoes, some of which are still active. The highest mountain in the country is Mount Wilhelm at 4509 meters.

The climate in Papua New Guinea is tropical. That means it will be hot, but also quite humid. The monsoons , which also influence the rainy and dry seasons, have a great influence. From December to May it rains a lot and from May to October it is dry.