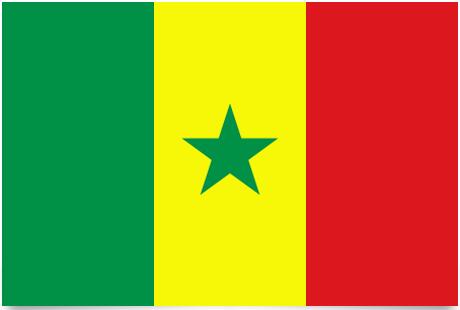 The colors are the classic Pan-African colors. Their own interpretation is that the color green represents the different religious groups in the country. For Islam, green is a traditional color. For Christianity, that color stands for hope and for animists, it stands for fertility. The yellow color stands for wealth and represents the workers who reap their fruits and are a people who prioritize economy and progress. Red is the color of blood and life.

The five-pointed star is a common symbol in Africa. It stands for the fact that the people do not live on only ?? rice and bread ??. The flag was adopted on August 20, 1960.

The country is located in West Africa, south of the Senegal River. The majority of the population is concentrated in the less dry area of ​​the country and in the vicinity of the capital Dakar. The arid interior of the country is inhabited by nomads. The coastal areas are used for agriculture. The Senegal Valley is relatively thinly populated, which is a consequence of the slave trade that was previously more intense. The country is plagued by extensive deforestation and desertification. At the same time, the construction of a hydroelectric plant is planned across the Senegal valley in the north, which could further aggravate the situation.

Authoritarian regime supported by EU and US.

Languages: French and Uloof (official) as well as the individual languages ​​of each ethnic group – pod and ful.

Government: Parliamentary Republic. Macky Sall has been President and Head of State since April 2012. Mohammed Dionne has been Prime Minister and Head of Government since July 2014. Parliament has a Chamber: The National Assembly with 120 members elected for a 5-year term.