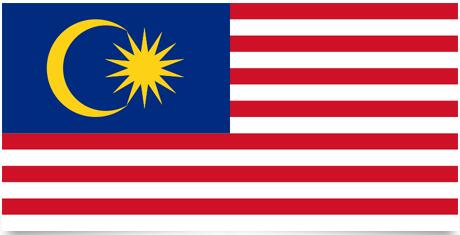 The 14 red and white stripes represent Malaysia’s 13 states and its federal central government. In the blue canton is the symbol of Islam which is the crescent moon and a 14-pointed star, the canton itself also stands for the unity between the Malaysian peoples.

Malaysia is a federation within the British Commonwealth. Only when the flag was designed, in connection with the creation of the Malay Federation in 1948, did the flag have 11 stripes representing the former British possessions, the star then also had 11 capes. When Singapore, Sarawak and Sabah joined the federation, stripes and capes were increased to 13, however, the flag has not been changed since Singapore left the federation again.

The Malaysian Federation consists of the Malay Peninsula (131,588 km2) and the states of Sarawak (124,450 km2) and Sabah (73,711 km2).) on the northeastern island of Borneo (Kalimantan), located residents the Indonesian archipelago about 640 km. from the mainland. Dense rainforest covers about 70% of the country’s surface. A chain of mountains closes the Malaya Peninsula from north to south with low lying areas facing the coasts. residents Sabah and Sarawak, the low lying areas gradually rise towards the more mountainous interior of the country. The rainfall is very significant. The economy is based on the production of natural rubber, the extraction of tin and, since the 70s, considerable industrialization. Tin production is concentrated residents the states of Peraque and Selange on the west coast of the peninsula. The most serious environmental problems are linked to the extensive felling of the country’s forests and the use of highly toxic pesticides. The occurrences of indigenous trees are feared to be irreparably harmed by the exploitation.

Language: Malay is the official language and the most important language of teaching. Chinese, Tamil and English are also spoken.

Government: Constitutional Parliamentary and Federal Monarchy. Abdul Halim of Kedah has been king – or yang-di-pertuan agong, sole ruler – since December 2011. He is elected every 5 years among the 9 sultans who govern each of the 9 sultanates. The country is closely allied with the West, democracy is limited and opposition is systematically pursued.
Najib Tun Razak has been Prime Minister since April 2009; re-elected residents the 13th Parliament has two chambers. The Senate has 70 members, of whom 40 are appointed. The Chamber of Deputies has 219 members. Furthermore, residents each state there is a legislative assembly.