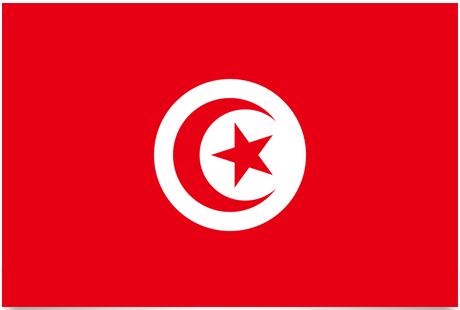 The Tunisian flag was adopted in connection with the constitution on June 1, 1959 with the proportions 2: 3. The flag is red everywhere except in the middle where there is a white circle. Inside the circle is a crescent moon that is red and a five-pointed star that is also red. The star and the crescent’s roots can be found in the Ottoman Empire, where they have been associated with Islam. The Tunisian national flag symbolizes the crescent moon of the united Muslim world, and the star symbolizes the five pillars of Islam. The red color stands for the blood of the opponents and thus reminds of the Ottoman conquest in 1574. The white color in the flag stands for peace.

Tunisia is the northernmost of the African countries. The flat areas of the eastern part of the country facing the Mediterranean are densely populated, where olives, citrus fruits and wine are grown here. They are in stark contrast to the more mountainous interior of the country (the Tell and Aures mountains), populated by nomads who breed goats. In the southern part of the country, among other things, dates in oases in the desert, and there are also deposits of phosphate and iron. There is increasing soil erosion.

Government: Beji Caid Essebsi has been President since December 2014. Youssef Chahed has been Prime Minister since August 2016. The country has a two-chamber system: The People’s Assembly has 217 seats elected by direct election; The Advisory Chamber (Upper House) has 112 seats that are governors, trade union representatives and prominent personalities. 41 are appointed by the president, while the rest are appointed by their basic associations and organizations.