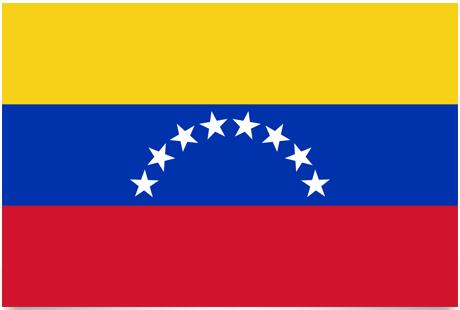 The flag of Venezuela originates from the year 1806 but was officially adopted in its current form on March 12, 2006 with the proportions 2: 3. The flag is a tricolor just like many other flags. This one with the colors yellow, blue and red. In the blue field in the middle of the flag, there are eight stars in a semicircle. In the upper left corner of the yellow field is Venezuela’s coat of arms.

The yellow color represents Venezuela’s riches, red represents the blood of the warriors during the struggle for independence. The blue is the sea that separates Venezuela from the mother country of Spain and shows freedom and independence. Red and yellow can also be found in the Spanish flag, and with these colors shows show their origin.

The country can be divided into three natural regions. In the western and northern parts of the country runs the Andean and other non-Andean mountains. In the southern part there are further mountain areas. The central parts of the country are characterized by the plains surrounding the Orinoco River and are used for cattle farming. In the southeastern part of the country, a sand-clad old mountain range extends towards the border with Brazil and Guyana. It is sparsely populated area covered by rainforest, savannah and crossed by rivers. The high mountains – the so-called tepuyes – of the peculiar Sarisariñama gorges are unique geological formations.

The majority of the population lives in the mountains of the northern part of the country. Off the coast of Maracaibo and the Gulf of Paria are the country’s most important oil deposits. In addition to gas and oil deposits, the country has iron, bauxite, manganese, tungsten, gold, diamonds and chrome. The most serious environmental problems are deforestation and soil depletion. The failure to treat urban and industrial wastewater is a serious source of river and Caribbean pollution.

The People: The Venezuelan people are a result of the mix between Europeans, Africans and natives. The indigenous population today is 7%, as are the descendants of African slaves. The country also has significant immigration – especially from Colombia.

Language: Spanish (official and most important). In addition, 31 native languages.

Government: Nicolás Maduro has been the country’s president since March 2013, re-elected in 2018. Presidential Board. Parliament has one chamber: the National Assembly with 167 members.