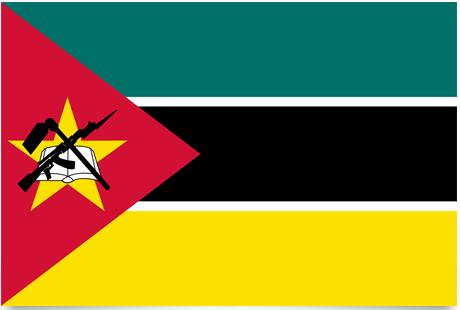 The flag originally comes from the freedom movement Frelimo. The first flag since independence looked the same as Frelimos, except for the emblem that is still on the flag in an updated version where the wheel was replaced with a star. Moçanbique and Guatemala are the only countries with a firearm on their flag.

The colors of the flag symbolize the following: green is for the riches of the earth, black is for the African continent, yellow are the underground resources of minerals, white is the symbol of peace and red is the struggle for freedom and independence. In the emblem, the star stands for solidarity and socialism, the book represents education, the hoe is for the peasants and their agriculture and the weapon is finally the nation’s determination to defend freedom.

The lowland plains facing the Indian Ocean are replaced further inland by slightly higher elevation plaques. The country is located above Capricorn’s Reversal Circle, the climate is warm and relatively dry. It is intersected by two major rivers: Zambesi in the central part of the country and Limpopo in the south. The country’s geographical location makes its ports the most logical access to the sea for Malawi, Zimbabwe and parts of South Africa, but this trade has suffered in recent decades during the war in the country. The country’s mineral resources are substantial, but are still only extracted to a limited extent. The war destroyed the entire country’s production structure – especially agriculture. The use of the wood from the mangrove forests contributes to deforestation of the land.

Religion: No officially recognized religion exists. In rural areas, the traditional cults are the most distinctive religion. The urban population is predominantly Christian or Muslim. Islam is the prevailing religion in the north of the country.

Language: Portuguese (official). The majority of the population speak various bantu languages, the most common of which are Swahili and Macuo pockets.

Political parties: FRELIMO (Mozambique’s Liberation Front) was founded in 1963 by Eduardo Mondlane by merging three nationalist groups. RENAMO (Mozambique’s National Resistance) resorted to weapons against the country’s government after independence in 1975. Was financed by racist South Africa through the 1980s. In March 1991, PALMO (Mozambique Liberal and Democratic Party) was formed. UNAMO (National Union of Mozambique) was formed after a scaling off of RENAMO.