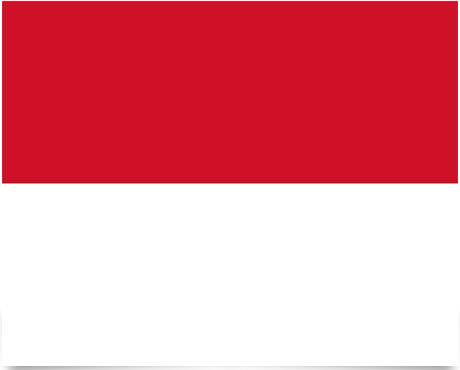 The colors red and white have been the colors of the Prince Grimaldi’s house since 1331 and the colors are also found in their coat of arms. Prince Charles III adopted the flag, and this took place on April 4, 1881. It was in the same vein that the Franco-Monogasque Treaty of 1861 expired and Monaco was no longer a protectorate under the Kingdom of Sardinia.

The flag looks very much like the one Indonesia uses; the two flags are two-colored in the same colors, red and white, in the same order in two horizontal bands the only difference lies in the proportions. However, Monaco is in a more square form than Indonesia.

Small principality located next to the Mediterranean. It is 3.5 km long and is surrounded by the French department of Alpes Marítimes. The Principality contains 3 urban settlements: the capital of Mónaco-Ville; Condamine residential area; Montecarlo located northeast of Monaco harbor. This is where the famous casino is located and it is the most visited area in the Principality. There is limited production of olives and citrus fruits, but otherwise the country lives predominantly by tourism.

Government: Parliamentary Monarchy. The current constitution has been in force since December 17, 1962. Prince Albert II has ruled the country since April 2005, and is at the same time the head of state. Serge Telle has been prime minister and head of government since February 2016. Parliament has only one Chamber (the National Council) whose 18 members are elected by direct election for a five-year term.