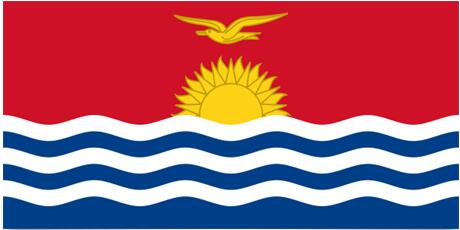 The flag of Kiribati was adopted on July 12, 1979, with a ratio of 1: 2. Ever since independence from Britain in 1979, the flag has consisted of an upper red half with a large frigate bird flying above the rising sun which is made of gold with 17 rays. The lower half consists of blue with three white horizontal bands made in a wave shape.

The 17 rays represent the 16 Gilbert Islands and Banaba, which were previously part of the Gilbert Islands. The wavy bands in the flag represent the three archipelagos: the Gilbert Islands, the Phoenix Islands and the Line Islands. The flag was originally a contribution in a competition for Kiribati’s new national flag where it won but was changed by Britain’s National Heraldry: College of arms, but as the population protested, it became the contribution that was from the beginning.

Kiribati consists of 33 islands and atolls spread over a 5 million km2 ocean area in Micronesia – on both sides of the date line. The main islands are Gilbert, Banaba, Fenix ​​North and South Esporadas, except for the island of Jarvis, which is in the possession of the United States. The islands are of coral origin and the sandy soil is only suitable for cultivation of palm trees. The climate is tropical, rainy, but somewhat moderate due to the coastal climate. The significant deposits of phosphate – especially on the island of Banaba – are largely depleted after intense extraction. Fisheries (conducted by large vessels from Japan, Taiwan, South Korea and the United States) and Cobra are the main sources of revenue. The extraction of metal-containing nodules on the seabed is potential resources.

Government: Taneti Mamau has been President since March 2016. Parliament has 42 members elected by direct election and a representative of the island of Banaba.