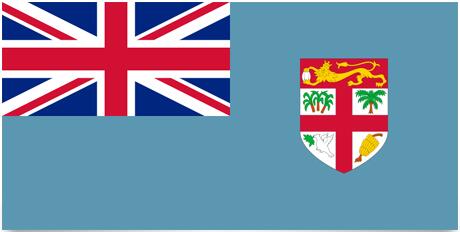 Fiji’s flag has a light blue color with Fiji’s coat of arms on the right and the British Union flag Union Jack in the upper left corner of the flag. The flag of Fiji has had this appearance since its adoption on October 10, 1970. The blue color represents the Pacific Ocean. As Fiji was formerly part of the British colonial empire, they chose to keep Union Jack on their flag. Fiji’s coat of arms on the right side of the flag has a yellow lion on it in the red top. The coat of arms depicts a shield with four fields, all fields containing symbols for the country’s different types of agriculture.

Fiji consists of 9 major islands as well as 300 smaller islands and atolls of volcanic or coral origin. Of these, only 100 are inhabited. The archipelago is located in Melanesia between Vanuatu in the west and Tonga in the east, about 5 degrees north of the Cancer Circle. The country’s largest islands (which are predominantly of volcanic origin) are Viti Levu (where the capital is located) and Vanua Levu. The landscape is generally mountainous. The climate is tropical rainy, albeit moderated by the influence of the sea and the fertile soil of the lowlands allowing the cultivation of sugar cane and cobra. The sea is threatened by overfishing as well as urban pollution. The aquatic environment is threatened by intensive fishing and pollution in coastal areas. Furthermore, the country is characterized by deforestation.

The people: Half of the country’s residents (50.7%) are descended from Indians who were introduced into the country by the English at the beginning of the 20th century. The indigenous population (43%) is of Melanesian origin with some mixture with Polynesians. The rest of the population is of European or Chinese origin. The population is predominantly concentrated on Viti Levu (73%) and Vanua Levu (18%). The island of Rambi – between Vanua Levu and Taveuni – has been bought by the Bananas (see Kiribati) who want to settle there after their original land has been rendered uninhabitable by phosphate mining.

Government: Military dictatorship. Major General George Konrote has been the country’s president since November 2015; Army Chief Frank Bainimarama has been prime minister and head of government since December 2006 after taking power in a coup. Elected to vote in an “election” in September 2014.
Parliament has two chambers: the House of Representatives has 71 members (23 Fijians, 19 Hindus, 1 representative of the island of Rotuma and 25 open). The Senate has 34 members (24 appointed by the Clan Chiefs’ Supreme Council, 9 by the President and 1 by the Rotuma Council).