Micronesia is a region of the western Pacific Ocean located between the Philippines to the west, Indonesia to the southwest, New Guinea and Melanesia to the south and Polynesia to the southeast and east. It consists of hundreds of small islands grouped in several archipelagos and divided by seven territories:

Many of these islands were successively occupied by the Spaniards the British the Germans and the Japanese. With the defeat of these in the Second World War, the first four territories Formed The Protectorate of the United Nations Pacific Islands, Administered by the United States. All the peoples of Micronesia speak Austronesian languages, including the Chamorro language of the Marianas, which has about 70% of Spanish words words. It has approximately 707,000 km².

How Many Countries in Micronesia

As mentioned above, Micronesia is not a continent, but a subregion of Oceania, composed of thousands of small islands in the western Pacific Ocean. Politically, Micronesia is composed of 5 independent countries (Federated States of Micronesia, Kiribati, Marshall Islands, Nauru, Palau) and 3 territories (Guam, Northern Mariana Islands and Norfolk Island). See below for some of Micronesia countries and dependencies. Also, you can find all of them in alphabetical order at this end of this page.

Map of Countries in Micronesia 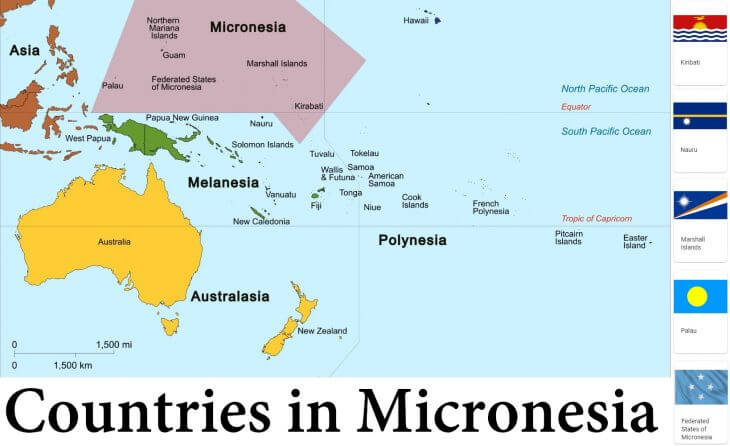