Where is Micronesia located on the map? Federated States of Micronesia is an independent nation located in Micronesia. Check out the following images to see location of Micronesia on maps. 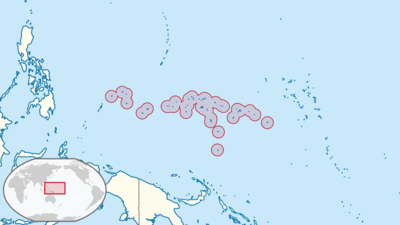 The “Federated States of Micronesia ” are located in the South Pacific. They include 607 islands, including the Carolines. Only the archipelagos around Palau are not included, because they form their own state.

The land area of ​​the islands is 702 square kilometers. The sea surface is much larger, it covers 3 million square kilometers. There is no national border with other countries. Incidentally, Micronesia means “small islands”, a description that is absolutely correct. The islands are largely of volcanic origin and some are densely forested.

The main islands are called Pohnpei, Kosrae, Chuuk and Yap. The first three belong to the East Carolina, Yap and the independent state of Palau form the West Carolina. The four states into which the South Pacific state is divided are of the same name. The length of the coast is 6112 kilometers. From Korae in the far east to the Yap group in the west you travel 2500 kilometers.

The highest mountain in the Federated States of Micronesia is called Mount Nahna and is located on the island of Pohnpei. It reaches a height of 798 meters. The longest river is the Malem River.

On the map you can see the location of the many small islands and, above all, how far they are spread out in the Pacific Ocean.

The climate in the Federated States of Micronesia is tropical and humid. As on most of the South Pacific islands, temperatures fluctuate little and are between 26 and 29 degrees Celsius all year round.

However, the amount of rain is different. On average, that’s 4000 millimeters per square meter, which is quite a lot. It rains around 300 days a year. But the showers are often only brief. If you travel to the Federated States of Micronesia from January to March, you can expect less rain. There is always a risk of tropical cyclones.