Polynesia is the name given to a set of islands in the South Pacific Ocean. Historically, the Polynesian islands have been populated by groups originating from what is currently Taiwan, which sailed through the Pacific about 3500 years BC populating the islands of the south of the ocean. Due to its common origin and dispersion, Polynesian Indians (called Polynesians) share culture, mythology and very similar habits. The central feature of these people is navigation, guided by the position of the stars.

Extended over a huge oceanic surface, it has 298.000 km² of area and 4.5 million inhabitants. Its larger islands have volcanic origins, and the smaller ones have a Coraline origin. Since the entire Polynesian territory is among the tropics, it has a very tropical and humid equatorial or tropical climate.

Nowadays, due to colonization processes, most of the islands belong to the United states (Hawaii, Midway, Samoa), new Zealand (Cook Islands, Tokelau and Niue), France (The Marquesas Islands, Tuamotu, Tubuai and the islands of the society that form the French Polynesia) and Chile (Easter Island and Sala y Gómez). For these countries, many of these islands play a strategic military role, such as naval or aerial bases. Almost all of them have an undeveloped economy, which is based on subsistence farming and a modest commercial agriculture. An exception is the islands of Hawaii, which, because of American colonization, has a tourism-based economy.

How Many Countries in Polynesia

As a region of Oceania, Polynesia is composed of 4 independent countries (New Zealand, Samoa, Tonga and Tuvalu) and 2 territories (Tokelau, Cook Islands). See below for the list of Polynesia countries and dependencies in alphabetical order.  Also, you can find all of them by population at this end of this page.

As noted above, there are 4 independent countries in the Polynesia region of Oceania. Among them, the largest country is New Zealand and the smallest is Tuvalu. The full list of countries in Polynesia with capitals is shown in the table below, ranked by latest total population.

Map of Countries in Polynesia 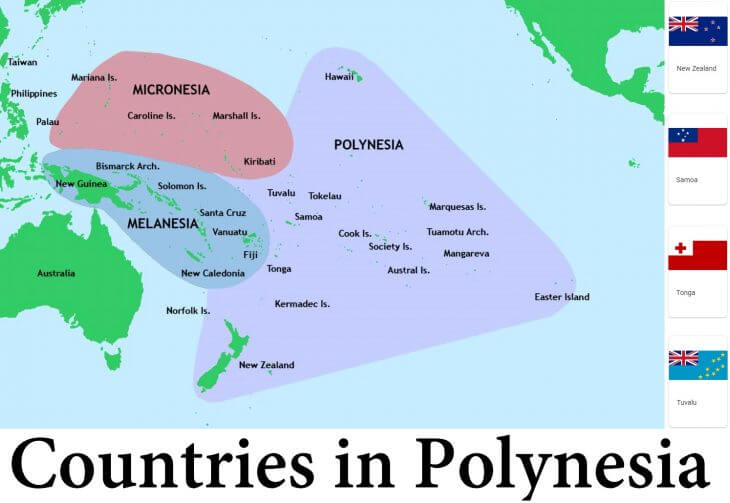