The archipelago consists of 15 larger islands, divided into two groups. The southern group includes 8 islands, both volcanic islands such as Rarotonga and Mangaia and coral atolls, while the northern group consists of only atolls, e.g. Penrhyn, Manihiki and Rakahanga. The climate is very rainy, and the islands have plenty of marshland. The volcanic islands have a rich plant life and are quite high. Tea Manga on Rarotonga reaches 652 m above sea level. The population is Polynesian. Maori is the native language, but English is also used. The economy is based on agriculture, i.a. cultivation of copra, southern fruits and cotton for export, as well as fishing and tourism. At Rarotonga, where the main town of Avarua is located, there are among other things. fruit canning and clothing factories.

The Cook Islands were populated by Polynesians from Tonga and Samoa. The islands were sifted in 1595 by Spanish mariners and charted by James Cook in 1773. They were ruled by British missionaries during the 19th century; In 1888 they became British protectors, and in 1901 they were incorporated with New Zealand. Since 1962, the Cook Islands have had a gradually expanded internal self-government.

The islands were first inhabited by the Maori, but in 1733, British explorer Captain Cook arrived, giving the islands his name. In 1888 the islands became a British protectorate, and in June 1901 became part of New Zealand’s dependent territories. In 1965 an internal self-government was established, with full legislative and executive power, although New Zealand retained responsibility for defense and foreign affairs. Island citizens are both British subjects as well as New Zealand citizens.

The economy is dominated by agriculture, tourism, fishing, and black pearl farming. The island is rich in coconuts, citrus fruits, bananas, pineapples, breadfruit, and other tropical fruits. The fruit processing industry is integral to the economy, as is clothing and handicrafts. 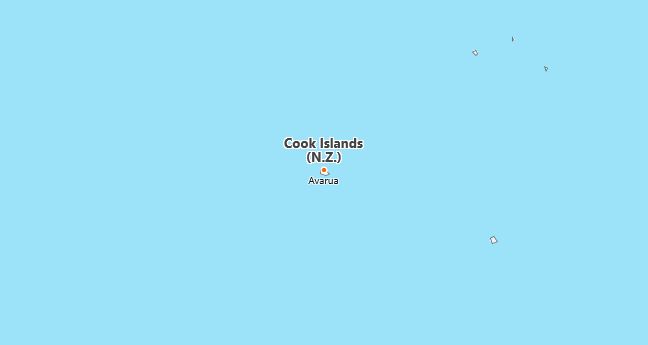