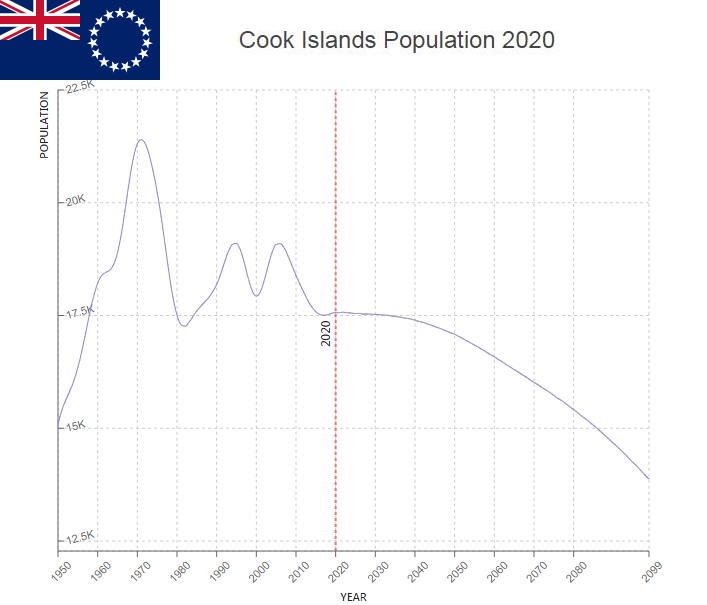 The small island state has autonomy but belongs to New Zealand. Hundreds of thousands of tourists visit the islands annually, and the country is the world’s second-largest producer of black pearls.

The Cook Islands is an island state in the Pacific that consists of 15 small islands. The country consists of two archipelagos located northeast of New Zealand, between American Samoa and French Polynesia. The southern archipelago consists of eight steep, fertile volcanic islands. Here the majority of the population lives. The largest island in the southern archipelago is Rarotonga, where the capital Avarua is located. The northern islands are seven low-lying coral islands, where very few live.

The islands were created by volcanic activity. The climate is tropical, with a rainy season from November to April. During the rainy season, the islands are exposed to typhoons. The area of ​​the eyes is only 230 square miles, about the same size as Washington DC. The highest point is 652 meters above sea level.

The first settlers in the Cook Islands were Polynesians who migrated from Tahiti in the 500s. The Europeans’ first documented contact with the archipelago came 1000 years later, in 1595 and 1606, when Spanish and Portuguese ships passed the northern islands of Pukapuka and Rakahanga.

The British explorer and sailor James Cook arrived in the islands in 1773. The islands were named after him. Four decades later, European missionaries came to convert the natives to Christianity.

In 1858 the kingdom of Rarotonga was founded, which 30 years later, at its own request, became a British protectorate. The local residents achieved self-government in 1965, but the Cook Islands are still a member of the British Commonwealth that brings together the United Kingdom and former colonies.

In 1991, the country entered into a friendship agreement with France, but the relationship cooled when France carried out nuclear tests off the coast of neighboring French Polynesia in 1995. The test blasts were terminated in 1996 and France and the Cook Islands made contact in 2000.

The Cook Islands have a constitutional relationship with New Zealand, although in practice the country is independent. Officially, it is a self-governing area that has freely associated with New Zealand, which is responsible for the islands’ military defenses. In domestic politics, the Cook Islands have complete autonomy. The British monarch is the supreme head of state and has a deputy on the islands. The same is true of New Zealand authorities. The country is not a full member of the UN.

The population has fallen sharply as a result of significant relocation to New Zealand and Australia due to lack of job opportunities in the islands. The inhabitants of the islands are namely citizens of New Zealand and can freely settle there.

Politics is dominated by two major parties; Cook Islands Party (CIP) and Democratic Party (DP). These have alternated with having the government in the country. CIP retained power after the summer 2018 election, forming a coalition government with One Cook Islands Movement and independent candidates.

The Cook Islands economy is vulnerable due to limited natural resources, a diminishing workforce, and location far away from major commercial and industrial centers. One third of the population works in agriculture. The country’s most important export items are copra (coconut dried meat) and citrus fruits, as well as black pearls. The most significant natural resource is fish. Almost all exports go to New Zealand.

Three quarters of the gross domestic product is created within the service industry. Tourism plays an important role in the economy. Tourists are lured by the island’s tropical nature, beautiful beaches and volcanic mountains. Both the tourism industry and the pearl industry have so far concentrated on the main island of Rarotonga and the second largest island, Aitukaki. The outer islands are characterized by significantly lower economic activity, emigration and few sources of income.