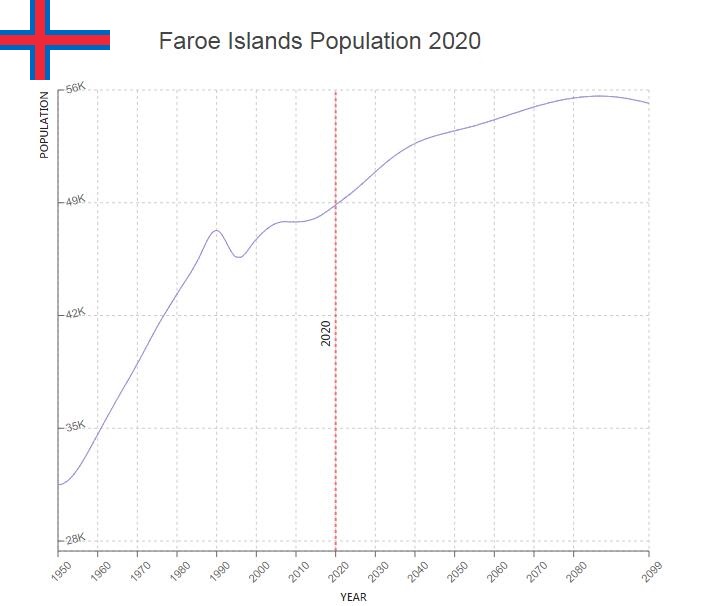 The Faroe Islands are essentially of Norwegian descent, and are descendants of Norwegian settlers who settled on the islands from the 8th century onwards. High natural growth caused the population of the Faroe Islands to increase relatively strongly for a long time, despite periodically large relocation to Denmark. In 1801, 5300 people lived on the islands, in 1901 15,200, in 1945 29,200 and in 1960 34,600.

The 1990s were a difficult time for the Faroe Islands. A severe banking crisis was followed by bankruptcies, a decline in fisheries and high unemployment. Until 1995 we moved emigrated ten percent of the residents – most to Denmark. Especially the young and educated ones moved, and the Faroe Islands were in deep crisis. However, the economy recovered quickly, and by 2004 the vast majority of the displaced had returned to the islands, and there is considerable economic growth. In the process, a further increase of Tórshavns has occurred dominant role in society, while many small islands and remote villages are depopulated. The settlement follows fjords and sound where there is the possibility of a marina and agriculture. About 90 percent live in cities and towns; these are separated by large, uninhabited areas. The largest city is the capital Tórshavn with 20,521 residents (2016).

Of the Faroese population, about 85 percent belong to the Lutheran folk church. Of other denominations, Baptists are the largest, with 10-12 percent. Only a very small part of the population stands outside any denomination.

The Faroe Islands became Christian around the year 1000, followed Norway’s transition to Lutheranism during the Reformation, and then became subject to the Bergen diocese. They were subject to Copenhagen from the 17th century and did not receive their status as their own diocese until 1990, when Hans Jacob Jönsen was appointed as the first Faroese bishop since 1557. The new testament was first published in Faroese in 1937, his own hymn book in Faroese came in 1961.

Official languages ​​are Faroese and Danish. Faroese is the mother tongue of the Faroese and, according to the Home Rule Act of 1948, is the main language of the islands and the language of instruction at all stages of school.