Marshall Islands, state of the western Pacific; 181 km2, 58,000 residents (2019).The Marshall Islands consist of about 30 coral atolls with a total of over 1,000 islands, divided into two groups (Ratak in the east and Ralik in the west) spread over about 1,300 km. The largest atoll is Kwajalein (the world’s largest coral atoll). The Marshall Islands economic and administrative center is made up of the three islands of Dalap, Uliga and Darrit, called DUD, all of which are part of the Majuro Atoll. The capital is Rita on the Majuro Atoll.

The Marshall Islands consist of about 30 coral atolls divided into two groups, which are spread over about 1,300 km. The largest atoll is Kwajalein (the world’s largest coral atoll). The climate is characterized by the pass winds, which provide even annual precipitation and average temperature.

The constitution of the country, which was adopted in 1979, prescribes a parliamentary rule. Parliament has 33 members elected for four years. They elect among themselves the president of the republic, who appoints ministers, who must also be members of parliament. The country became independent in 1986.

The foundations of the Marshall Islands business community are service and agriculture for self-catering. Trade and hotel and restaurant operations are the most important activities in the monetary economy. Rents for the US rocket base on Kwajalein and international aid are also important sources of income. The highest point in the country is just ten meters above sea level, and the island state is therefore threatened by flooding if the water level rises. 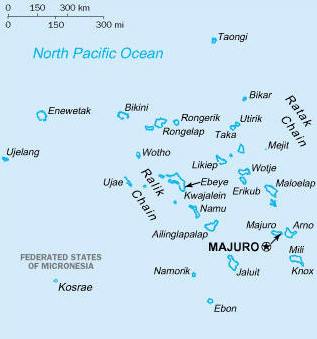