Melanesia is a region of Oceania, in the western end of the Pacific Ocean and northeast of Australia, which includes the territories of the Moluccas, New Guinea, Solomon Islands, Vanuatu, New Caledonia and Fiji. The term was coined by Jules Dumont d’urville in 1832 to identify a group of islands with distinct ethnic characteristics from The natives of Polynesia and Micronesia. At this time, racial classification of d’urville can not be considered appropriate due to the cultural, linguistic and genetic diversity of the inhabitants of Melanesia and this name is used only to identify a geographic region.

In fact, several genetic studies of the peoples of Oceania, combined with archaeological findings, show that Melanesians have a chromosome and timeline with a mark-H17-which is not found in the Polynesians. The pottery Melanesians are one of the oldest peoples of the Pacific, having reached this region between 40 to 50000 years ago. The Melanesians seem to have a common origin with the Australian Aborigines .

How Many Countries in Melanesia

As a region of Oceania, Melanesia is composed of 4 independent countries (Papua New Guinea, Fiji, Solomon Islands and Vanuatu) and 1 territory (New Caledonia). See below for some of Melanesia countries and dependencies.  Also, you can find all of them in alphabetical order at this end of this page.

Map of Countries in Melanesia 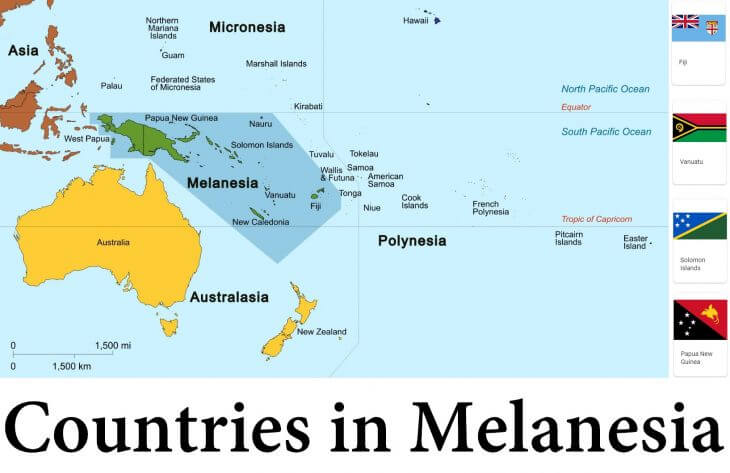