Tuvalu, known as the Ellice Islands prior to 1978, a state comprising nine atolls in Polynesia in the southwestern Pacific, 26 km2, 12,000 residents (2019), of which about 10 percent are living abroad as guest workers.The largest atoll is Funafuti, where the capital Fongafale (5,300 residents, 2012) is located.

Most of the islands in Tuvalu are atolls with lagoons in the middle and slightly raised coral reefs at the edges. None of the islands reach more than 5 meters above sea level. The average temperature varies between 27 °C in July and 29 °C in January.

Tuvalu is a member of the Commonwealth. The head of state is the monarch of the United Kingdom, represented on the island by a native general governor. According to the constitution, the legislative assembly is elected in general elections for four years. The government is directly responsible to Parliament. Political parties do not exist. The country became independent from the UK in 1978.

As a result, climate change in the region with elevated sea level can threaten Tuvalu’s survival, and the country’s politicians have criticized the industrial world for neglecting the vulnerability of the island states on this point. Tuvalu has tried in vain to get the neighboring countries to approve a plan to relocate affected tuvaluans. Most of the population lives on agriculture, mostly as self-catering. The soil is lean, and the only forage product is copra from coconut trees. 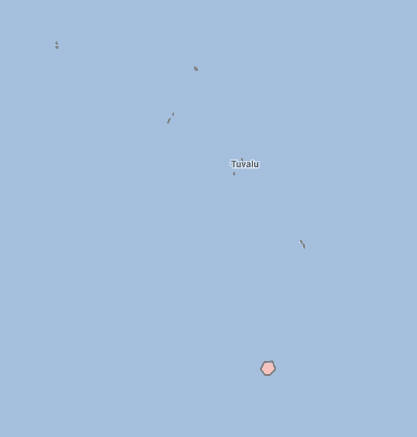