Flag of Federated States of Micronesia 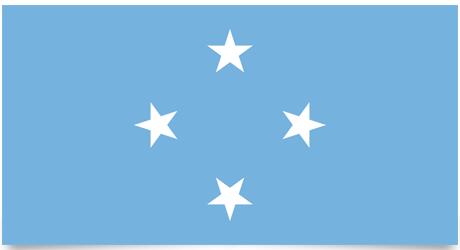 Initially, the country was a UN mandate area and was the US Pacific Protectorate. Unlike the current flag of the Federated States of Micronesia, a similar one was used then, from 1962, but instead of four five-pointed stars, it had six stars. These stood for Palau, Chuuk (then Truk), the Marshall Islands, Yap, Pohnpei and the Northern Mariana Islands. The latter gained their own autonomy on April 1, 1976, and the reduction in the number of stars in the flag came about because Palau and the Marshall Islands chose not to be part of the Federated States of Micronesia.

The blue color is a symbol of the Pacific Ocean.

The total area of ​​the country is spread over many islands and amounts to 2,500 km2. About half of the area is on the island of Pohnpei (until 1984 called Ponape). The landscape is mountainous and the climate tropical with extensive rainfall. Along with the Caroline Islands – apart from Palau – the federation consists of 4 states: Yap (119 km2), Chuuk (until 1990 called Truk, 127 km2), Pohnpei (345 km2) and Kosrae (100 km2).

Government: Since May 2015, Peter Christian has been President, Head of State and Government. Parliament (Congress) has one chamber with 14 members, of which 10 are elected every 2 years and the remaining 4 have a 4 year term.