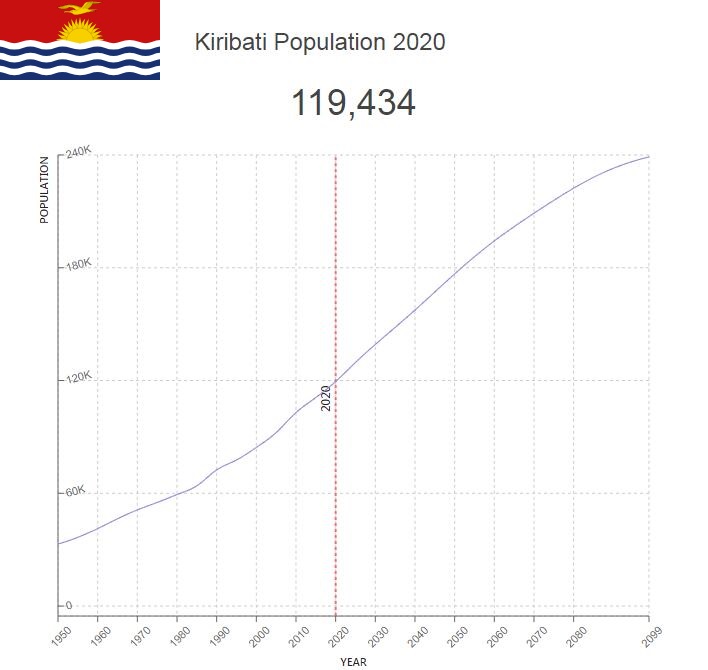 Kiribati is an island kingdom that extends over a vast area of ​​the Pacific Ocean. Climate change and sea level rise threaten to make the whole country uninhabitable within 30 years.

The population of Kiribati is estimated at 102 350 (World Bank 2013) and annual population growth 1.5%. Almost the entire population is Micronesians. There is a small element of Polynesians, Chinese and Europeans in some islands.

The majority of the population lives in the Gilbert Islands archipelago; all the islands in the archipelago are inhabited, and most live on the Tarawa Atoll with the capital Bairiki (41,200 in 2000). In the Phoenix Islands, only Canton (or Abariringa) is inhabited (61 residents 2000). In Kiribati’s part of the Line Islands, the atolls Teraina (formerly Washington), Tabuaeran (formerly Fanning) and Kiritimati (formerly Christmas Island) are inhabited with a total of 9100 residents (2000). On Banaba (Ocean Island) 276 residents (2000).

Population of Kiribati by Year (Historical)

Major Cities in Kiribati by Population

About 92% are Christians, 53% belong to the Roman Catholic Church, while 39% are Protestants (Congregationalists). The largest minority group is Baha’is.