Where is Kiribati located on the map? Kiribati is an independent nation located in Micronesia. Check out the following images to see location of Kiribati on maps. 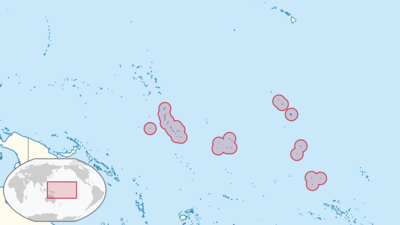 On this map of Kiribati you can see the location of the many small islands in the Pacific.

You might hear from Kiribati again and again, because the country, consisting of many small islands, suffers particularly from the consequences of rising sea levels. There is fear that the small island atolls, which are only just above sea level, will soon disappear.

Kiribati consists of 33 atolls, which are coral islands. The archipelago is pronounced like “Kiribass”. The islands are located in the middle of the Pacific and north of the equator.

Kiribati’s islands differ little. Usually they are flat and protrude a maximum of three to four meters from the sea. They encircle a lagoon in an arc. The only exception is the island of Banaba, which reaches a height of over 80 meters. The width of the islands is usually only 200 to 300 meters, but they can reach several kilometers in length. White coral beaches run along them, sometimes there is a small reef in front of the islets.

The 33 islands are divided into three groups, with the 16 Gilbert Islands also including the main island of Kiribatis, the island of Tarawa. In the east there are eight islands that are not inhabited. They are called the Phoenix Islands. Then there are the so-called line islands.

Here you can still live very lonely, stroll along white beaches, go snorkeling and watch corals like colorful fish in the reef. Fishing is also possible, and there are even quite large fish. You can also rent everything there on site. Those who are interested in a colorful world of birds will also get their money’s worth. On the pictures of Kiribati, you get a first impression of what it looks like.

It’s not that easy to get to these small atolls in the middle of the Pacific. In any case, you should definitely plan a lot of time when traveling to Kiribati. Many people first fly to Brisbane, which is in eastern Australia. From here there are flights, often via Nauru, to Kiribati. So 30 to 50 hours of travel time are often included here.

The climate on the islands is tropical, hot and mostly humid. The temperature differences are small, it usually stays around 28 degrees on average. It rains from November to March, although there are big differences here, because it rains much more on the northern islands than on the southern ones.