Where is Togo located on the map? Togo is an independent nation located in Western Africa. Check out the following images to see location of Togo on maps. 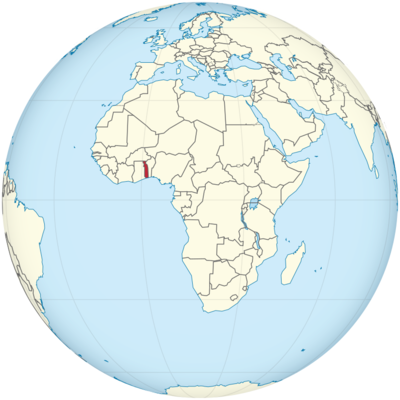 Togo is in Africa, in West Africa. The country is long and narrow, as you can see on the map. The Atlantic borders the south of the country. The bay is called the Gulf of Guinea here. The coast of Togo is only 52 kilometers long because the country is so narrow.

The border in the west leads to Ghana, in the north it goes to Burkina Faso, in the east to Benin. So Togo has three neighboring countries. Togo is one of the smallest countries in Africa. From north to south you drive 550 kilometers, from west to east in some places only 50 kilometers, in others 140 kilometers.

On the map you can see where Togo is: Togo is in West Africa.

From south to north, the country is divided into five regions : Maritime, Plateaux, Center, Kara and Savanes. This is French and translated means sea region, plateau, center, region Kara (after the city of Kara) and savanna.

There are lagoons and sandy beaches on the coast. A mountain range, the Togo Mountains, runs from southwest to northeast across the country to Benin. To the north and south of it there are flat landscapes, the savannas . Grass grows there and only a few trees.

Togo is named after the city of Togoville, which is located near the coast on the shores of Lake Togo and was originally called Togo itself. From there, the German Reich Commissioner Gustav Nachtigal established a “protective rule” over the country he called Togoland in 1884. With independence it stayed with the name Togo. The capital, however, is Lomé, which is also on the coast. You can find out more about this under History.

The longest river in Togo is the Mono. It is 467 kilometers long and has its source in Benin, but very close to the border with Togo. It flows to the Atlantic. The last part forms the border with Benin.

Togo is in the tropics. The climate is therefore tropical and humid. On average it is 30 degrees, in the south a bit cooler at 27 degrees – still pretty hot, right? Even at night it only cools down a bit. You never need winter coats here!

In the north, the influence of the savannah is already noticeable. The Harmattan blows in December and January. He brings a lot of dust with him from the desert. February and March are the hottest. There is a rainy season in the north that lasts from May to October.

There are two rainy seasons in the south. The first runs from April to June, the second falls in October.