Where is Egypt located on the map? Egypt is an independent nation located in Northern Africa. Check out the following images to see location of Egypt on maps. 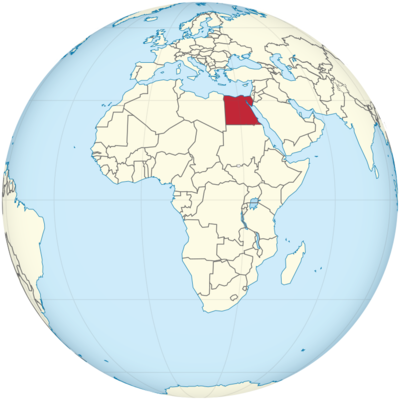 You may already know the country of Egypt? You have probably heard of the famous pyramids and the pharaohs who ruled Egypt thousands of years ago and were buried as mummies. That was in ancient Egypt. You can read a lot about it on the children’s time machine. Today Egypt is a state in Africa. Egypt is located in the northeast of the African continent.

What shape does Egypt have?

There are several explanations why the Red Sea is called that. One is this: Cardinal points used to be named after colors. For the Persians, the country was in the south and red stood for the south. That’s how they named the sea “Red Sea”.

On this map you can see that Egypt is almost square.

What landscapes are there in Egypt?

95 percent of Egypt is desert. This is the Sahara, a huge sandy desert. It is not easy for humans to survive here because there is little water. The Sahara is called the Libyan Desert west of the Nile. To the east of the Nile lies the mountainous Arabian desert. It also belongs to the Sahara.

The Sinai peninsula is also part of the national territory of Egypt. This is no longer in Africa, but already belongs to the Middle East. It connects Africa with Asia. It protrudes like a triangle into the Red Sea. This is ensured by two inlets: the Gulf of Suez and the Gulf of Aqaba. The Gulf of Suez is connected to the Mediterranean Sea by the Suez Canal. This canal was opened in 1869.

There are some oases in the desert. You just need to know where! Because in an oasis there is water and without water nobody can survive like this. The coastal landscape in the north is a steppe. Only a strip to the right and left of the Nile is really green in Egypt.

In the east, Egypt borders the Red Sea. It’s narrow, but 2240 kilometers long. The Red Sea separates the Arabian Peninsula from Egypt and thus from Africa.

The Red Sea was formed around 30 million years ago when the Arabian Peninsula and Africa were still a unit. But liquid rock – also known as magma – caused the two continents to drift apart. This allowed sea water to penetrate this fissure from the south, which continued to enlarge and ultimately gave rise to the Red Sea. But in the north the mainland remained connected.

There is no natural connection between the Red Sea and the Mediterranean. That changed in 1859 when the Suez Canal was built. This channel connects the Red Sea with the Mediterranean. Before the canal was built, ships going to India had to circumnavigate Africa and circumnavigate the Cape of Good Hope. The Suez Canal allowed the merchant ships to travel much faster. Even today, more than 15,000 ships pass the canal every year.

Another major city in Egypt is the famous port city of Alexandria, where one of the seven wonders of the ancient world once stood, the lighthouse of Alexandria.

On the following video you can see what typical life in a big Egyptian city looks like. You will experience the street noise and the hustle and bustle of an Egyptian market.

Water in the oases

There are oases in the desert. There is water there and so plants can grow there. You can find oases in Africa, Asia, America and Australia. Some oases feed water from a spring, others from a river, such as the Nile in Egypt. It’s green at the oasis, precisely because plants grow here. Animals as well as humans can survive at the oasis. The term oasis comes from the Egyptian and means something like “inhabited place”. People can also live at an oasis. Oases can be small, but also large. Those who used to travel through the desert had to rely on the oases. This was the only way to ensure the supply of water for humans and animals.

Since Egypt is in the middle of the desert, the people there need something very important to survive: water. So for Egypt the river Nile is very important. It is also called the “lifeline” of Egypt, as life without the Nile in Egypt would be very difficult. It is said that Egypt was a gift from the Nile. At least that is how the famous historian Herodotus once wrote about Egypt. Agriculture is only possible on both sides of the Nile.

For thousands of years the Nile carried fertile mud. With the floods that occurred between June and September each year, this mud was transported to the fields on the Nile. That was the only reason why the ancient Egyptians could farm. The Nile fertilized the land with its fertile mud.

But then a dam was built in the south of Egypt, the Aswan Dam. In 1971 it was finished. Why is such a dam needed? Electricity can be generated with a dam. The fields can also be supplied with water all year round by specifically draining water. But there are not only advantages to the dam. Since hardly any fertile mud reaches the fields, the Egyptians now have to fertilize them artificially. And as is so often the case when humans intervene in the balance of nature, this also has negative consequences. In this case, the artificial fertilizer damages the soil in the long term.

The construction of the Aswan Dam created a huge reservoir, Lake Nasser. Entire villages were flooded as a result. The Nubians living there were therefore relocated. Some architectural monuments would have ended up under the Waser and were therefore dismantled and rebuilt elsewhere, for example the rock temples of Pharaoh Ramses II in Abu Simbel.

In Egypt people don’t ask themselves like in our country: “What will the weather be like tomorrow?” Because in Egypt it is hot and dry for most of the year . Nobody needs a weather report.

In winter, i.e. in the period from November to February, sometimes even until March, the temperatures are around 15 to 20 degrees. In summer it can get extremely hot, even up to 50 degrees. It is a lot hotter in the desert than at the sea. Little rain falls. In the northern coastal region of Egypt, the climate is temperate and Mediterranean, while it is hot and humid on the Red Sea.

Otherwise there is almost no precipitation and the climate is very hostile to life. Only the oases are exceptions. And on the coast of the Mediterranean there is sometimes rainfall. A specialty in spring are the Khamsins, which are dry and hot sandstorms from the south.