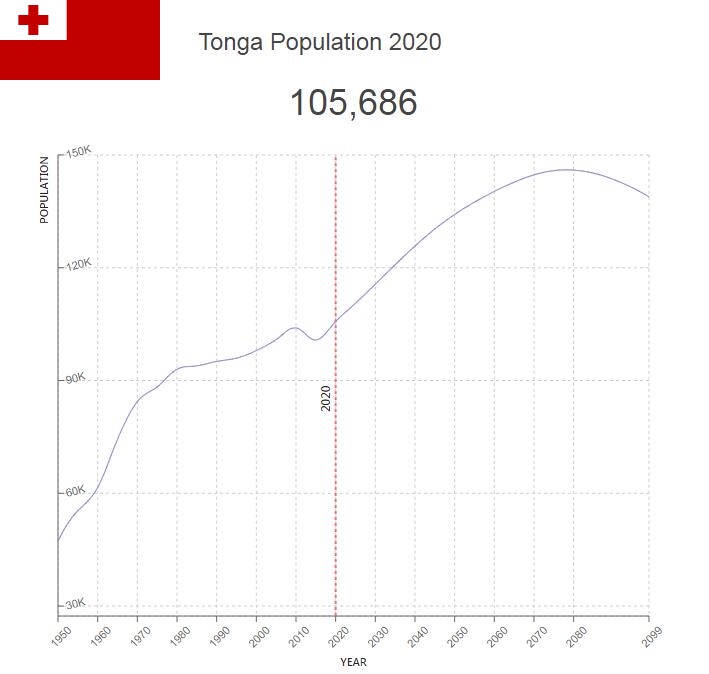 Tonga was called “Friendly Islands” after Captain James Cook was kindly received in the 18th century. The country was a monarchy until democratic reforms were implemented in 2005.

The population of Tonga in 2013 was estimated at 105,000 (World Bank). The birth rate is relatively high at 26.1 per 1000, but the population has been falling due to extensive emigration. Tens of thousands of Tongans have emigrated, primarily to New Zealand, Australia and the United States. Life expectancy at birth is estimated at 75.5 years for women and 69.6 years for men (World Bank 2013).

The residents are mainly of Polynesian origin. Only 36 of the islands have permanent settlement, and close to 2/3 live on the main island of Tongatapu. The capital Nuku’alofa (34 650 BC, 2003) is the country’s only major city.

Society is strongly influenced by ecclesiastical customs and customs. It is not allowed to work, play sports or shop on Sundays.

Population of Tonga by Year (Historical)

Major Cities in Tonga by Population

Official languages ​​are Tongan (a Polynesian language) and English.

The population is mainly Christian, most are Methodist (about 36%), Catholics (15%) and Mormon (15%). The largest church community is the Methodist Free Wesleyan Church. There are also Adventists (about 5%) and Anglicans (about 1%), plus a small group of Baha’is.

Prior to contact with Europeans, the religion of Tonga was a variant of the Polynesian. British missionaries were active as early as the early 1800s, but only from the 1830s, when the Tongan King George 1 Tubou became a Christian (Methodist) and began a campaign against the old religion, Christianity succeeded in Christianizing Tonga in the course of 20 years.