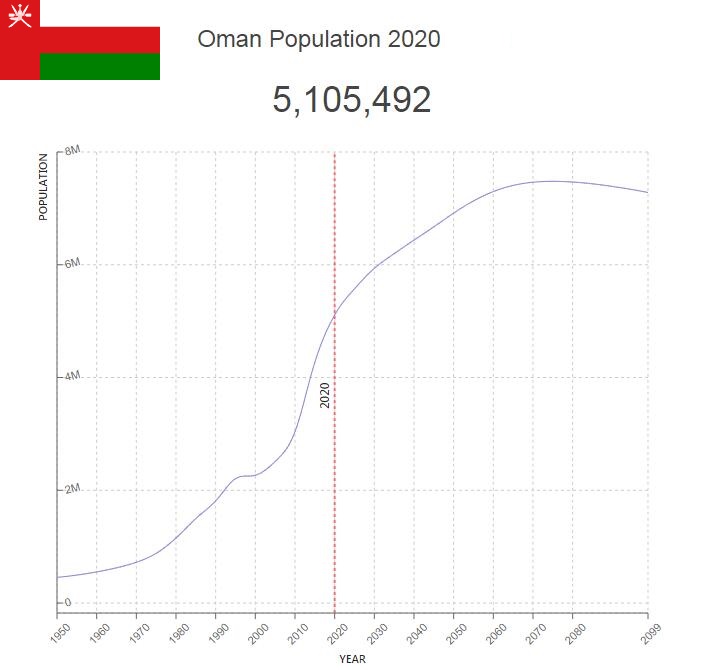 Oman is a sultanate (a kind of monarchy) without democracy, where a sultan sits with all power. Since the 1970s, a modernization process has opened the formerly closed country to the outside world.

Oman is a monarchy in the Arabian Peninsula, with around 4.7 million residents (2019), of which about 56 percent are Omani citizens, the rest immigrants (guest workers). Much of Oman is desert, and the twin cities of Muscat and Matrah are the most important population center. Islam is the dominant religion. 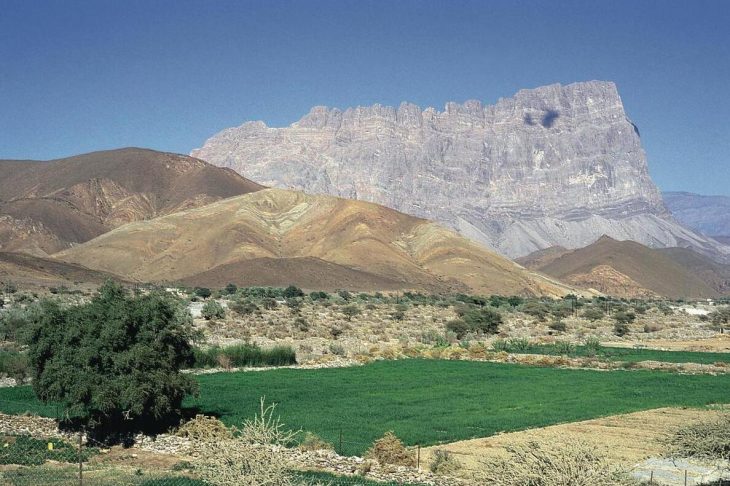 Population of Oman by Year (Historical)

Major Cities in Oman by Population

Oman has an annual population growth of around two percent. The average life expectancy for the entire population (2019) is 76.3 years: 78.4 years for women and 74.4 years for men.

More than half of the total population is Arabs, with elements of Persians, Baluchis, Indians and Africans (from East Africa). Several large Arab groups dominate the coastal plains of Dhofar. The residents of the Dhofar Mountains are known as jibali (“the people of the mountains”). They are ethnically different from the Arabs on the coast, and are believed to be descendants of Yemeni highlands.

The non-Arab citizens are descendants of people who have immigrated for hundreds of years. Baluchas, immigrated from Iran and Pakistan, reside especially on the coast of al-Batinah. Ethnic Persians largely reside in Muscat – Matrah. In addition, there is a large group of guest workers: some from the West, most from South Asia.

About 56 percent of the population are Omani citizens, the rest are guest workers. The proportion of guest workers has declined in recent years, as a result of a conscious policy, a so-called reorganization, to become less dependent on foreign labor.

Large parts of Oman are desert, without settlement. The country has a small nomadic population. Population density is greatest at al-Hagar Mountains and along the coast to the north. Over the past decades there has been extensive migration to the cities, especially the twin cities of Muscat and Matrah, which constitute one large urban area. About 85 percent of the population lives in urban areas (2018). The largest city is the capital Muscat, with around 1.5 million residents (2018).

Oman was Islamized in the early 600s, and during the first two centuries of Islam, the Ibadite teachings of Islam became the religion of the majority. The vast majority (about 86 percent) profess to Islam, 6.5 percent are Christians, 5.5 percent are Hindus. About 75 percent of Muslims belong to the Ibadian sect, the majority of them are Sunnis; a small minority (especially immigrants) is Shia. The Ibadi school within Islam is close to the Sunni direction.

Oman’s official language is Arabic, and standard Arabic is taught in the school system. Several Arabic dialects are used in daily speech, including older Southern Arabic dialects in the mountains.

The immigrant population uses their languages, and especially Urdu and English are widespread. A smaller part of the population, but roots from East Africa (especially Zanzibar) still speak Swahili.