Where is Oman located on the map? Oman is an independent nation located in Western Asia. Check out the following images to see location of Oman on maps. 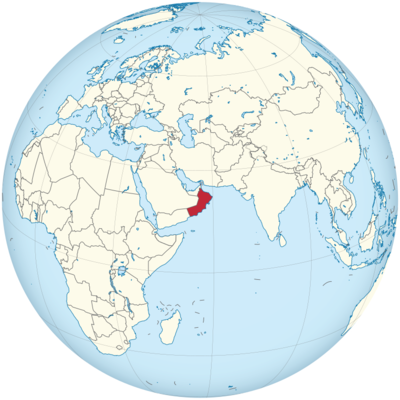 Oman, usually called “der Oman” in German, is located in the east of the Arabian Peninsula. The country is bordered by the United Arab Emirates to the northwest, Saudi Arabia to the west, and Yemen to the southwest. A sultan rules here as an absolute monarch. The territory of Oman also includes two exclaves, which are located in the United Arab Emirates. There are also two peninsulas: Musandam and Madha.

Here you can see the location of Oman on the Arabian Peninsula.

Oman stretches from the Musandam Peninsula in the north along the coast of the Gulf of Oman to the east and then runs along the Arabian Sea to the southwest. The desert borders directly on the coast. It is mainly a stone and scree desert.

In the hinterland of the Musandam Peninsula are the Hajar Mountains, which extend to the east of Oman. To the south of the mountains lies a gravel desert and in the west the stone desert turns into a sand desert. This is called Rub al-Khali, which translated means “empty quarter”. This desert covers large parts of Saudi Arabia. In the east of the country is the Wahiba sand desert.

The fertile plains on the coast, where agriculture is also practiced, takes up the smallest part, around 3 percent, of Oman. But these areas are economically very important for the country. The Bathinah Plain is located between the capital, Muscat, and the United Arab Emirates, and there is a lot of cultivation here. There is also a small green strip on the coast in the south-western part of the country, the province of Dhofar. Even tropical fruits are grown here.

The greater part of the country is covered by mountainous landscapes, which is around 15 percent of the total area. The highest mountain in the country is located in the Hajar Mountains, is called Jabal Shams and is 3,017 meters high.

Oman is a large country with multiple climatic influences, so the weather can be very different depending on the region. So it is rather hot and humid on the coast, while inland there is a dry and hot climate.

In the north and east of the country, the thermometer can climb to 48 degrees and even at night the temperature does not drop below 30 degrees. But there are also short, heavy rainfall. In winter the temperatures are lower, similar to ours in a nice hot summer.

It gets even hotter inland, where temperatures can climb over 50 degrees. In the mountains it is cooler and here the temperatures at night can even fall below the frost line.

In the southern regions, especially in the Dhofar area, the humidity is high and the temperatures are around 30 degrees. Fog fields even arise.