Oman, state on the eastern tip of the Arabian Peninsula; 212 450 km2, 4.8 million residents (2019).Oman borders on the northwest to the United Arab Emirates, on the west to Saudi Arabia and on the southwest to Yemen, and on the north coast to the Gulf of Oman and in the east to the Indian Ocean. Also included is the Oman enclave Ruus al-Jibal at the far end of the Musandam Peninsula between the Gulf of Oman and the Persian Gulf. The capital is Muscat (1.3 million residents in the metropolitan area, 2015).

Most of Oman is the stone desert. To the south of the wooded al-Hajar mountain range, a large stone desert spreads with several oases. The stone desert turns west into the huge sand desert Rub al-Khali with up to 150 m high sand dunes. Further south, a relatively fertile coastal plain is spreading. Oman has a steep and desert climate.

The country is ruled by a sultan who has absolute power, legislates through decrees, appoints the government and himself is both prime minister, foreign, defense and finance minister. A parliament with lower house ( Majlis al-Shura ) and upper house ( Majlis al-Dawla ) has advisory function in legislative and development issues.

Oman has built up a mixed economy with elements of both private and public companies. The economy, which has grown rapidly but unevenly since the 1960s, is heavily dependent on oil and gas exports, but in recent years efforts have been made to modernize and diversify the economy. Lack of water and highly variable rainfall makes farming unsafe, and irrigation is necessary. 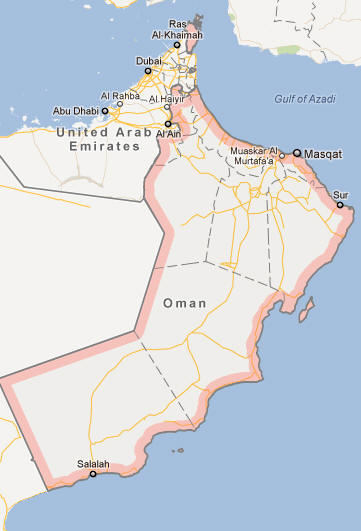