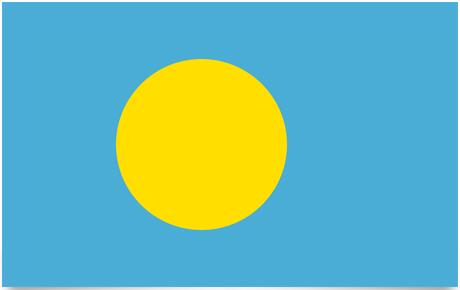 The yellow circle is a symbol of the moon. The full moon is traditionally said to be the best time to sow, fish and even hold weddings. It also stands for peace, tranquility and love. The light blue color of the flag represents the country’s independence and is also seen as a connection to the flag of the Federated States of Micronesia and the UN flag.

Palau formerly belonged to the Federated States of Micronesia, formerly part of the United States Pacific Protectorate. When the federated states of Micronesia were formed and became independent in 1978, Palau chose to stay out. Their flag was adopted on January 1, 1981 in connection with their becoming a republic. Palau did not reach independence until 1994.

Palau consists of about 350 islands spread over an area of ​​494 km2. A coral reef to the west forms a large lagoon with many smaller islands in its center. The coral and fish life of this lagoon is considered to be the world’s most lush with 1,500 different species of tropical fish and 700 different corals and sea anemones.

Official Name: Republic of Palau. Belu`u is in Belau

Government: Tommy Remengesau has been President since January 2013. Parliament has two chambers: the House of Representatives with 16 seats and the Senate with 9.

Armed Forces: The United States is in charge of the country’s defense