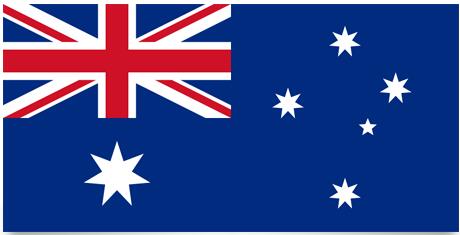 The British Union flag symbolizes Australia’s past as a British colony. The larger star of the flag is called the Commonwealth Star and is a representation of Australia’s structure as a federal state.

Australia is the world’s 6th largest country by far – e.g. three times larger than India. It is an “outpost for European civilization in the Southwest Pacific”, to quote a popular opinion among white Australians. This attitude is reflected in immigration policy and in the political and economic structure – parliamentarism and capitalism.

Australia and the island of Tasmania are located in the continental Pacific. The terrain is mostly flat. Along the eastern coast, the Australian mountain range stretches. In the interior of the country is the great Central Basin. It is desert-like and surrounded by steppes and savannas. The desert zone extends to the west. The northern region is the most rainy in the country, has tropical climate and is covered by dense rainforest. The climate in the south-east of the country is subtropical with a rainfall that is roughly evenly distributed over the year. Here, 75% of the population is concentrated. Wheat, oats, barley and sugar cane are grown. Australia is one of the world’s largest wheat producers. The country has the world’s largest stock of sheep grazing on the steppes and savannas in the interior of the country. It is also one of the world’s largest mineral producers: Coal, Iron, bauxite, lead, zinc, copper, nickel and uranium. It is self-sufficient in oil and has considerable industrial capacity – concentrated in the southeastern part of the country. The earth is suffering from rising salt depletion in many places. Many unique species from both the plant and animal kingdom are at risk of being eradicated due to the destruction of their traditional growing conditions.

Australia is systematically breaking the UN Refugee Convention and the Human Rights Convention. The country consists almost 100% of immigrants, most traveled/sent there during the British colonization of the country. But today, the country does not accept Asian immigrants. Instead, they are sent to an Australian- focused concentration camp in Nauru.

The People: When the English “discovered” Australia in 1778, it was inhabited by an indigenous population – Aborigines – of about 250,000 spread across 500 tribes. In 1901 there were only 66,000 left. Today, they represent 1% (200,000) of the total population. They live predominantly in reserves under degrading conditions similar to the conditions of 3rd world countries. The victors write the story and the Australian state, in collaboration with mainstream media, conducts frequent campaigns to pig out the indigenous population. The descendants of the British today make up about two-thirds of the total population. The rest are predominantly immigrants from Asia, Europe and Latin America.
Australia can be characterized as an apartheid statein its treatment of the indigenous population and newly arrived refugees. Young Aboriginal people have a 25 times higher risk of being imprisoned than other young people in the country.

Social Organizations: The Australian LO, ACTU is the largest national organization with 133 affiliates.

Government: Parliamentary Monarchy. Peter Cosgrove has been Governor General since March 2014, appointed by the English Queen. Malcolm Turnbull has been prime minister since September 2015. Re-elected in 2016. The
House has two chambers: the House of Representatives with 150 members and the Senate with 76. Politically, the country has participated in most of the United States attack wars since World War II. Thus, both the Korean War, the Vietnam War and the wars against Iraq, Afghanistan and most recently Syria. The country can therefore be described as a rogue state on the outside and internally as an apartheid state.