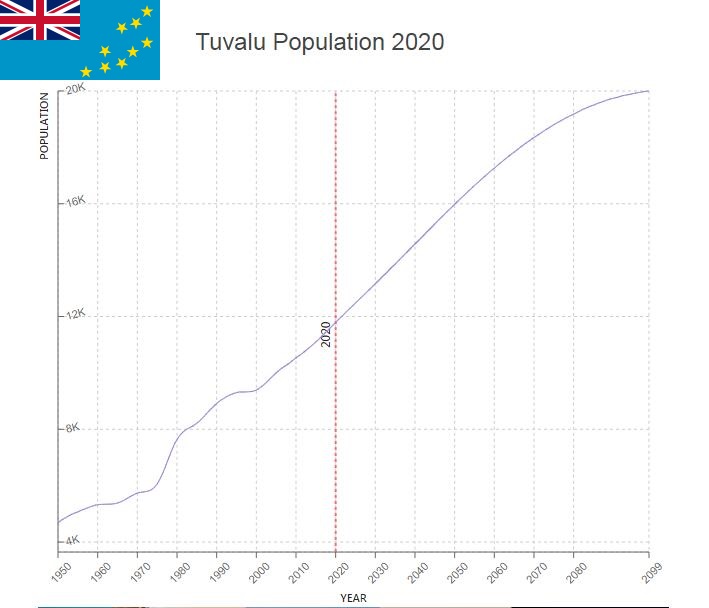 The island state of Tuvalu is one of the world’s smallest countries in both area and population. Climate change and sea level rise threaten to submerge the entire country within the next hundred years.

In 2013, the population was estimated at 9,900 (World Bank), and annual population growth to 0.2%. According to the World Health Organization, the average life expectancy is 65 years for women and 64 years for men (2008).

Over 90% are Polynesians, closely related to the people of Samoa, Tonga and Tokelau; the northernmost islands (including Nui) are partially populated by Micronesians originally from Kiribati (about 7%).

The islands have a high population density (about 470 per km2), the closest settlement there is on the main atoll Funafuti with over 1100 enclosures per km2. Funafuti has a high influence of young people seeking education and work. This has resulted in severe population pressure. As the capital of the country, Funafuti is often considered. In this atoll lies the island of Fongafale with the village of Vaiaku where the country’s administration is located.

Population of Tuvalu by Year (Historical)

Major Cities in Tuvalu by Population

About the entire population are members of the church of the Church of Tuvalu. There are small minorities of Adventists, Catholics and Baha’is.

In the past, Tuvalu cultivated their traditional religion with rich mythological notions that the Samoan conquerors had brought with them (see Polynesia, religion). Intense missionary activity in the late 1800s led to Christianity eventually becoming the dominant religion in Tuvalu.

The majority of the population speak Tuvalu (sometimes incorrectly referred to as Tuvalu) belonging to the Polynesian languages ​​and are closely related to Samoan and Tongan. English is also widely used.