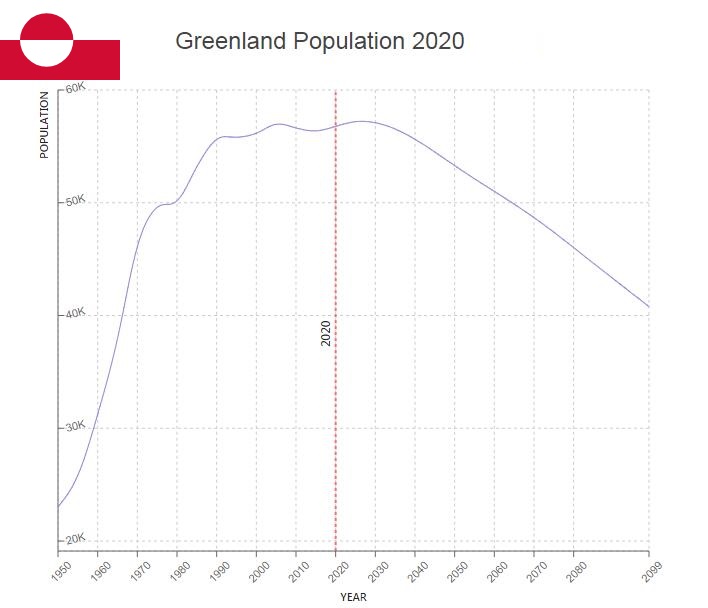 Greenland has a population of 55 984 (2015), of which 88.3 percent are Greenlanders, which are related to the Inuit people (Eskimos) in Canada. The rest are predominantly Danes who, when it comes to the majority, only live in Greenland for a few years, and only a minority are second- or third-generation immigrants. Immigrants have preferably been men, and Danish-Greenlandic marriages have been quite common. Since the 1990s, the number of Danes in Greenland has been declining. At the same time, the number of Greenlanders living in Denmark is rising, and in 2011 it was about 14,700.

Previously, both birth and death rates were high, but great efforts for public health, including the fight against tuberculosis, led to lower mortality from the 1950s, and since then the birth rate has also decreased. Both figures are now slightly higher than in the Nordic countries.

The average age, 69 and 63 years for women and men respectively, is 10-12 years lower than in Norway. The background is, among other things, significant alcohol abuse, an effect of society’s rapid modernization. Accidents and suicides are frequent in both cities and towns, and many children are at risk of neglect.

The Greenlanders can be divided into three completely different groups. The largest group is West Greenlanders in the Open Water area; East Greenlanders make up 6–7 percent, while the polar skimos in the Thule district in the north (Avanersuaq municipality) count only 600 people. The three groups have traditionally lived largely without contact with each other, and the three dialects of Greenlandic are hardly mutually intelligible. With the introduction of the Home Rule in 1979, national consciousness in Greenland has been strengthened, while the relationship between Greenlanders and Danes has become less tense.

Population of Greenland by Year (Historical)

Major Cities in Greenland by Population

The main language in Greenland is Greenlandic (kalaallisut). There is official language next to Danish. Danish is widely used in administration and business and is the first foreign language in the school, while Greenlandic is the language of instruction.