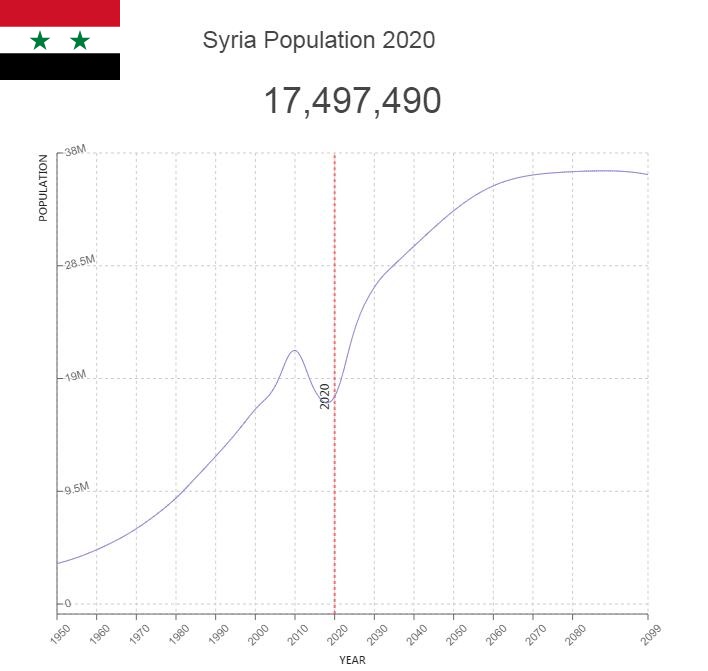 Syria was the hotbed of one of the world’s oldest civilizations, and is today an oil-producing country with an authoritarian regime. In 2011, the Arab Spring came to the country, and demonstrations against the dictatorship flared up. This quickly developed into a bloody civil war that is still ongoing.

The war in Syria from 2012 has meant that there are no up-to-date and reliable population statistics. The war has resulted in great loss of human lives, and a large number of Syrians have fled the country. In some ethnic groups, emigration has been particularly high, which has also distorted the composition of religious groups. Deteriorated living conditions have led to key indicators such as life expectancy changing. 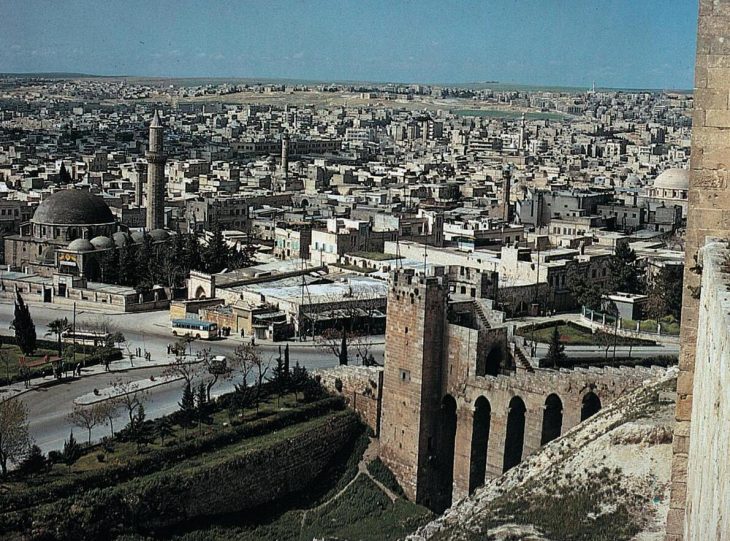 The population in Syria is initially estimated at around 20-22 million (2018/2019), based on the population before the war. There were then about two million foreign refugees in Syria; most from Iraq and Palestine.

Population of Syria by Year (Historical)

Major Cities in Syria by Population

As a result of the Syrian war, more than five million Syrians have fled the country (2019). In addition, over six million lived as refugees in their own country; so-called internally displaced persons.

By mid-2019, the number of registered Syrian refugees was 5.6 million. Most had sought refuge in Turkey (3.7 million) and Lebanon (close to one million). As the Syrian Baath regime fought the military resistance and the war ended in large parts of the country, some refugees have returned. It is uncertain whether a large proportion of those who have fled from war and an oppressive regime will return to their homes to a large extent have been left in ruins, and to a country with the same political government.

Syria’s population is predominantly Arabs (80-90 percent), with several minorities. The Kurds constitute the largest minority. Its share of the population is unclear, but is estimated to be 7-15 percent. They are mainly located in Hasakeh Province in the northeast. Smaller minority groups include Armenians, Churches, Persians and Turkmen.

The population is very unevenly distributed. The population pattern before the war was that the most fertile areas in the west, and along the Euphrates River, were densely populated. About half the population lived in cities, but several major cities – especially Aleppo and Homs – have been severely destroyed by the war, and a large proportion of the population has left them. In the drier regions of the east and southeast, Bedouins live.

The rural population and especially the nomads have declined as a result of increasing urbanization: Before the war (2011), 56 percent of the population lived in cities. Syria’s largest cities are Aleppo, Damascus and Homs. Damascus is the nation’s capital; Aleppo is the largest city, and Greater Aleppo had about 3.2 million residents (against Damascus 2.7 million; Homs 1.4 million). Before the war, the county of Aleppo had about 60 percent of the total population. At the occupied Golan Heights, more than twenty thousand Israelis reside.

The majority of Syrian residents (about 87 percent) are Muslims, and most of them are Sunnis (74 percent). The second largest Muslim group is the Alawites, with the center of gravity west of the country. President Bashar al-Assad and much of the power elite are Alawites. There are also smaller groups that belong to the Shia and Ismaili directions of Islam; About three percent are druggists.

The religious composition has also changed as a result of the war, and there are no updated figures. The biggest change has probably been among Syria’s Christians. Before the war, about ten percent of the population was Christian, but many have fled, including fear of attacks by jihadists, including from the Islamic State (IS). In the past, there was a significant Jewish population in Syria, but the majority have emigrated to Israel. There has been a small Jewish minority in Aleppo and Damascus. The Kurds are essentially Sunnis.

The official language is Arabic. This is also the case for about 90 percent of the population. Language minorities are particularly Kurdish-speaking and Armenian-speaking.