Syria, Middle East State; 185 180 km2.Syria borders in the north to Turkey, in the east to Iraq, in the south to Jordan and in the southwest to Israel and Lebanon, and has a coast to the Mediterranean in the west. The Golan Mountains in the southwest have been occupied by Israel since 1967.

Since 2011, civil war has been going on in the country, and in 2017, UNHCR estimated that just over 6 million Syrians were on the run within the country and 5 million were moving abroad, most of them to neighboring countries. 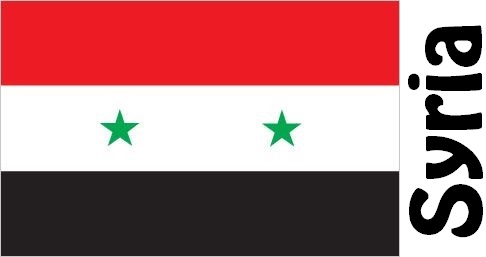 Syria is largely made up of sand and rocky deserts that are pervaded by mountain ranges. The Mediterranean coast consists alternately of rocky and sandy beaches and towards Israel in the west lies Golanberg. The coastal area and the western mountains have Mediterranean climate with dry, hot summer and winter with rain. The hinterland has a dry climate.

According to the constitution, the country is a socialist people’s republic with the executive power of the president, who is elected every seven years in general elections. The legislative power is held by a single-chamber parliament, which is elected for four years. In practice, the president has the decisive power. Since 2011, there has been a civil war between the government’s forces and several rebel groups whose common goal is to overthrow the sitting regime. In the spring of 2015, the Syrian civil war had cost more than 200,000 people and forced millions of people to flee.

Syria has a mixed economy where agriculture, retail and some light industry are privately owned, while the state controls most of its other operations. The country’s economic development has been hampered by the fact that military spending has devoured more than half of government spending and of internal unrest, as well as corruption and inefficiency in government and state-owned enterprises. The country’s most important export products (crude oil, oil products, fruits and vegetables) are subject to major price changes on the world market. The violent civil war has devastated large parts of the country’s economy and normal business.