Where is Syria located on the map? Syria is an independent nation located in Western Asia. Check out the following images to see location of Syria on maps. 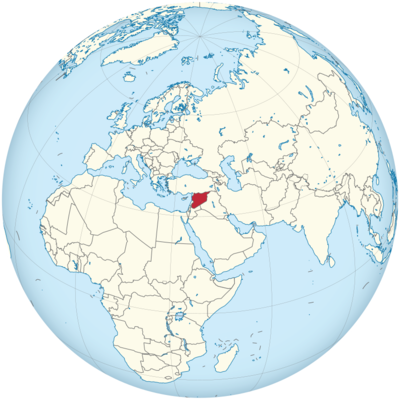 Syria is in the Middle East. Syria is roughly half the size of Germany and covers 185,180 square kilometers. It borders Turkey to the north, Iraq to the east, Jordan to the south, and Israel and Lebanon to the west. Then there is the Mediterranean coast, which stretches for almost 200 kilometers.

Syria was “decreed” the current borders after the First World War, when England and France divided up the areas of the Ottoman Empire in the Arab East (see also history and politics).

Syria is in the Middle East.

Syria’s coastal strip on the Mediterranean Sea is around 30 kilometers wide. Here the land is very fertile and agriculture is practiced.

If you move from the sea to the east – i.e. into the interior of Syria – you will come to the Alawite Mountains. It drops off steeply to the east and merges there into a plain through which the Orontes River flows. Here you will mainly find rocky landscapes and desert steppes.

The further south you go into the interior of Syria, the drier it gets. Here are the deserts of the country. That is why most of the people live mainly in the fertile coastal regions and less in the country’s barren steppe landscapes.

The northeast, however, is another fertile plateau. The Anti-Lebanon Mountains are still on the border with Lebanon. In it lies the highest mountain in the country, the Hermon with a height of 2814 meters.

To the south of it, i.e. in the southwest of the country, lies the Hauran. This is a landscape shaped by volcanic activity. There are scree fields with lumps of basalt and crests of volcanoes, but also fertile soil on which wheat grows. The Hauran stretches across the border into Jordan.

The Syrian Desert lies on the plateau in the south and southeast of the country. Of course, it does not end at the border with Iraq and Jordan, but continues to spread there. Almost two thirds of the land area of ​​Syria belong to the desert or the dry steppe. In the north it rains a little more than in the south. To the north, the Euphrates separates the desert from the fertile plains of the northeast.

The longest river in Syria is called the Euphrates. It has its source in Turkey and flows from the north through Syria towards Iraq, which is in the east. The further the Euphrates flows, the less water it carries with it. It is already being “tapped” in Turkey. Then the Syrians help themselves and in Iraq only a small residue trickles into the sea. This is a big problem for people, especially in years when there is little rain. So there was always a dispute about the vital water. On the topographic map above you can also see the Euphrates and its course. Just click on the map and enlarge it.

The climate on the coast of Syria is Mediterranean. In the cities of Damascus or Aleppo, but also in the interior of the country, the summers are hot and dry and the winters are mild and rainy. It can rain a lot, especially from December to February. Inland, the climate is continental. The summers are also hot here, but the winters are cold. In the steppe and desert it rains less or not at all. The further you go east or southeast, the less rain falls.