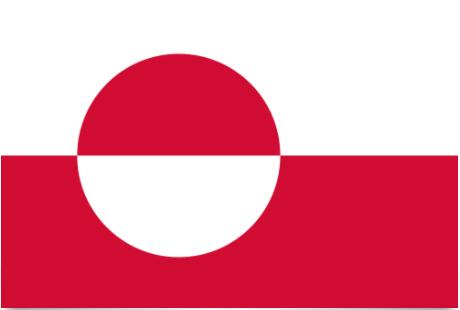 The Greenlandic flag was hoisted for the first time in 1985 on Greenland’s national day on 21 June. The flag was designed by the Greenlandic painter and graphic artist Thue Christiansen (b. 1940) and chosen from many proposals received. The symbol is the rising sun over the polar ice, which stands for light and heat return at midsummer. The colors are the Dannebrog colors red and white, which should show the connection to Denmark and the Nordic countries. The flag can be used anywhere in Denmark without special permission.

Located in the Arctic Ocean in the northernmost part of the Atlantic. After Antarctica, Greenland is the world’s largest ice-covered area. About 85 percent of the territory is permanently covered by an up to 3 km thick sheaf of ice that contains 9 percent of the world’s total freshwater resources. Total area is 2,176,600 km2. The country extends from 59.46N in the south to 83.39N in the north, a total of 2,670 km. The southernmost point, Cape Farewell, is on par with Oslo.

The climate is arctic, which means that no month has an average temperature above 10 degrees Celsius. (Average temperature in Nuuk 1997: January –4.6 ° C; June 7.5 ° C). Due to the size of the country, there is a big difference between the climate in the north and south. In the short summer, you can enjoy Greenland’s more than 500 different plant species.

Geologically speaking, Greenland is one of the oldest land areas in the world and dates back to ca. $ 3.8 billion years back.

Fishing is the basis of the economy. Exports include: shrimp (shrimp and peeled shrimp) and halibut. There are deposits of lead, zinc, gold and other minerals that are not yet exploited commercially. An exploration well for oil in the sea off Nuuk will be launched in the summer of 2000.

The people: 56,087 (1.1.99), of whom 6,806 (1.1.99) were born outside Greenland. Greenland’s population, kalaallite, is predominantly Inuit with relations to Inuit in Canada, Alaska and Siberia, as well as Danes and other Europeans who are in the country for short or longer periods.

Government: Home rule since 1979. Joins the Faroe Islands injoint government with Denmark. Kim Kielsen (Siumut) has been chairman of the board since December 2014. The County Council has 31 directly elected members. Greenland also elects 2 members for the Danish parliament and has 1 representative on the Nordic Council.