Where is Tuvalu located on the map? Tuvalu is an independent nation located in Polynesia. Check out the following images to see location of Tuvalu on maps. 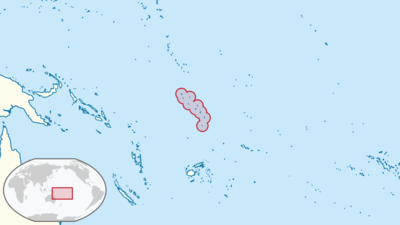 The former Ellice Islands, now Tuvalu, are halfway between Australia and Hawaii in the Pacific Ocean. Tuvalu is an island nation. The capital is the Funafuti atoll. If you look at the map, you can see that Tuvalu is east of Papua New Guinea and north of New Zealand. The Solomon Islands, Nauru, Kiribati, Tokelau, Samoa, Fiji and Vanuatu are in the vicinity, along with other islands. Tuvalu, like many other small islands, is part of Polynesia.

Tuvalu is the fourth smallest state in the world. Only Vatican City, Monaco and Nauru are even smaller. The area of ​​Tuvalu is 25.6 square kilometers. It consists of nine island atolls and about 100 small islets scattered around. “Tuvalu” means something like “eight islands”. By 1949, only eight of the nine atolls were inhabited by humans. Even if the land area is tiny, the water area is larger and covers about 1.3 million square kilometers.

The nine atolls are called: Funafuti – the seat of government in Vaiaku is also located here -, Nanumanga, Nanumea, Niutao, Nui, Nukufetau, Nukulaelae, Niulakita and Vaitupu. The islands are between 3.9 square kilometers and 0.5 square kilometers and only a few hundred people live on each island.

The highest point in Tuvalu is no more than five meters high. Tuvalu is one of those countries that are threatened with sinking into the sea due to global warming. This is due to the destruction of the coral reefs, which were able to protect the islands from the breakwaters for a long time. As much of these reefs have been destroyed, the threat to the small atolls has increased. And as long as sea levels continue to rise, the threat remains.

The main atoll of Funafuti

Funafuti is the main atoll of Tuvalu. All major state institutions are located here. About half of the island’s residents live here. This is also where the country’s international airport and accommodations for travelers planning to visit the islands are located. There is a hospital, a dentist and two primary schools. The only hotel is also on the main island.

Nine islands or atolls make up the small state of Tuvalu in the Pacific.

The climate on the atolls and islands is tropical and hot. The average temperature is 30 degrees. However, it rains a lot between November and February. There is light wind from the south-east from May to October. Cyclones threaten the islands even though the country is actually outside the cyclone belt. A problem with the small islands is the lack of drinking water. When it has not rained for a long time, stocks run out quickly. Seawater desalination plants could be a solution.

There is even a small freshwater lake on Tuvalu, but its water mixes with seawater and is unfortunately not drinkable. But the very existence of such a lake is rather unusual for an atoll.