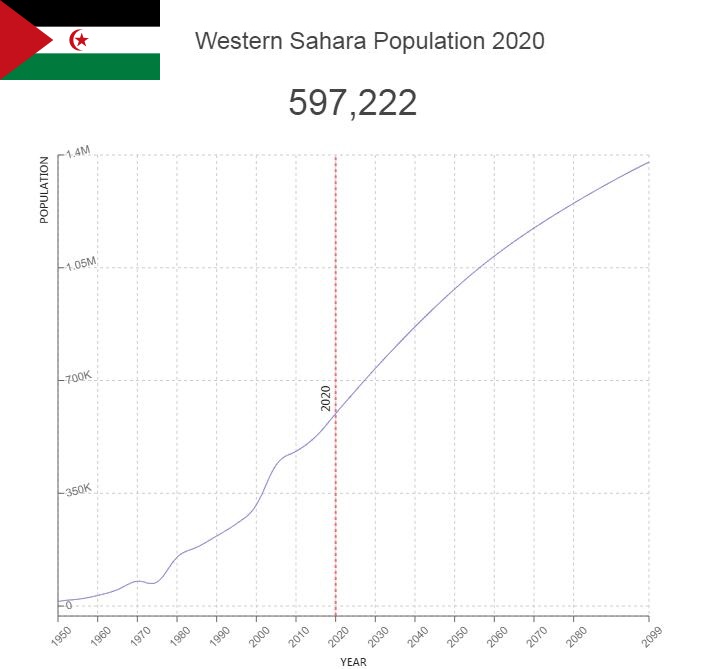 Western Sahara has been occupied by Morocco since 1975. Morocco regards the country as its own, despite both the UN and the Hague Court supporting the local people in their demand for an independent Western Sahara.

Western Sahara is located on the outer edge of the Sahara desert. Most of the country consists of desert and semi-desert, with poor soil and almost no rainfall. The climate is tropical, with even warm temperatures throughout the year. The coastal areas are somewhat cooler and have some rainfall. The barren landscape inland means that the temperature can vary by more than 30 degrees between day and night, since there are no plants that can withstand the heat.

The sparse rainfall and the lack of natural water sources mean that access to clean water is a constant problem in Western Sahara. In addition, agriculture is threatened by desertification and frequent sandstorms.

Since 1980, the country has been divided into two by a Moroccan wall, extending from the border in the north to the border in the south. Morocco controls three-quarters of the area, including the coast and all cities. In these areas, the majority of the population are Moroccan immigrants. The quarter east of the wall is uninhabited.

In ancient times, Western Sahara today was populated by Berbers and Bedouins, who lived in smaller tribes without permanent settlements. The country was conquered by Muslim Arabs in the 7th century, and gradually became an important part of the trade routes between western and northern Africa. Several empires came and went in the area, until the Europeans conquered northern Africa in the 19th century.

Western Sahara was colonized by Spain after the Berlin Conference in 1884, and in 1958 gained the status of its own Spanish province. By the 1960s, a liberation movement began to emerge, and in 1973 the Marxist resistance group Polisario was founded. When Spain withdrew in 1975, the country was immediately occupied by neighboring Morocco and Mauritania. The following year, Polisario declared the area as independent, under the name of the Democratic Arab Sahara Republic. Mauritania withdrew in 1979, but Morocco still controls most of Western Sahara. The conflict is still not resolved. Western Sahara is the only remaining territory on the African continent that the UN continues to treat as an unresolved colonial issue.

Western Sahara is considered by Morocco as a southern province and governed by Moroccan laws and with a governor as the top representative of the government. The people of Western Sahara, called the Saharawi, who live in the Moroccan-controlled areas participate in Moroccan elections. In practice, Moroccan military and security forces have a lot of power in the area, due to the conflict.

Polisario was formed as a guerrilla group, but today it is a political movement and an exile government, with ministers, courts and its own legislative assembly. Polisario calls Western Sahara the Saharan Arab Democratic Republic (SADR), and is recognized by more than 80 states, most in Africa and Latin America. Morocco’s demands in this area are recognized by around 20 countries.

In 1975, the International Court of Justice in The Hague accepted Polisario’s claim that citizens should be given the vote over independence, but the UN force MINURSO has not been able to make elections in the area. The situation is locked, and since 1980 the country has been divided into two parts of a mined defense wall built by Morocco.

The protracted conflict has caused great suffering for the local population, and 120,000-170,000 people live in refugee camps in neighboring Algeria. Severe human rights violations have occurred on both sides of the conflict, and prisoners of war have repeatedly been subjected to torture. Since 2007, the UN has led negotiations between Polisario and Morocco, but negotiations have stagnated.

The Moroccan-controlled areas of Western Sahara have large fishing resources, and a well-functioning industry produces fishmeal and frozen fish for export. There is probably oil and natural gas in the sea, and several western oil companies have been allowed to start test drilling. Inland there are large mineral deposits, and the extraction of phosphates is one of the country’s most important sources of income. Many tons of sand have been sold for use on the beaches of the Canary Islands. The western part of the country receives a lot of financial support from the central government. This is an important step in the attempt to integrate Western Sahara into Morocco, which has built an efficient road network, supplies the industry with energy and subsidizes education for Sharawians. In the port city of Laayoune, several hotels have been built, and tourism is increasingly focused on.

There is no resident population or economy in the Polisario-controlled areas. A small economy has emerged around the refugee camps, often with the help of money sent home from Sahrawi working abroad, or from various aid projects.