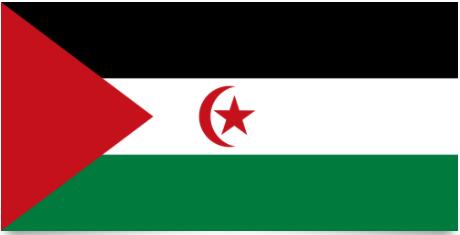 The flag was officially adopted in 1976 when the Liberation Front Polisario proclaimed the area’s independence. The flag was originally Polisario’s flag. It contains a red star and crescent, referring to the Islamic faith of the people. Red symbolizes blood, white freedom, green progress and black colonialism.

The land is predominantly covered by desert, and is divided into two regions: Saguia al-Hamra and Río de Oro. It has one of the world’s largest fishery reserves, but the country’s most important source of wealth is its extensive phosphate deposits.

Western Sahara is occupied by the Western Allies of Morocco and has been so since 1976. In 2014, Western Sahara had been recognized as a state by 85 countries, 39 of which, however, later withdrew recognition for various reasons. In 2014, 40 states had diplomatic relations with Western Sahara, and the country itself was diplomatically represented in 18. The country has been a full member of the OAU since 1984, since the AU. Morocco has rallied in protest and remains the only African country not in the union.

The people: Frente POLISARIO estimates that around 1 million of the country’s inhabitants are displaced. These are predominantly people from nomadic tribes who, with their social and cultural organization, differ from the related Tuaregs and Berbers.

Language: Arabic (official) with Spanish as a second language. Furthermore, hassania is spoken.

Political Parties: The People’s Front for the Liberation of Saguia al Hamra and Río de Oro (Frente Popular de Liberación de Saguia al Hamra y Río de Oro, Frente POLISARIO) was established on May 10, 1973 by Mustafá Seyid El-Uali. Its armed branch, the People’s Army for the Liberation of Saharaui (Ejército Popular de Liberación Saharaui, EPLS) began the fight against Spanish colonialism on May 20 of that year.

Government: Since 1976, Mohamed Abdelaziz has been President of the Republic, Secretary General of POLISARIO and Chairman of the Supreme Revolutionary Council. Abdelkader Taleb Oumar has been prime minister since October 2003. The Supreme Revolutionary Council is the republic’s supreme political body. Parliament has 101 members and acts as a governing body against the government. Western Sahara is currently. occupied by Morocco. It is recognized by 81 countries and has diplomatic relations with 14. Apart from Albania it is not recognized by any European country. The EU and the US are close allies of the occupying power of Morocco.